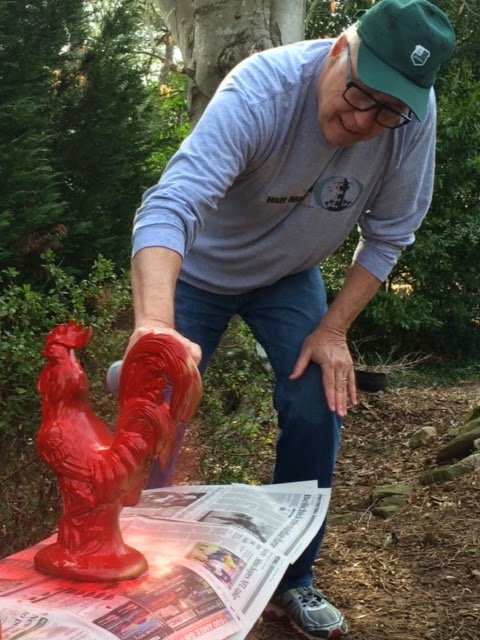 My husband Joe has had some high points in this life:  When he was described by the local paper as "adroit" for showing some dexterity during a Central High basketball game in Binghamton, NY.  When he completed his PHD at The University of Pittsburgh and his father cried.  When he married Mary and they became the proud parents of  Meghan and Bobby.  And when, after a loss so great he might not have ever had the courage or optimism to try again, he reconnected with me and we began a life together.

Things have been pretty good for Joe overall.  But nothing has been quite as good as when his fantasy football team won first place in a league of smart-ass whippersnappers that includes his son Bobby.  And with the win came the trophy, the Golden Cock, which, before it was spray-painted gold, graced one of the member's mother's kitchen when French Country was all the rage and ceramic chickens were everywhere.

When Bobby talked his father into joining the league a few years back, Joe wasn’t sure.  He didn’t want to get hung up on the details.  Plus he wasn’t all that into pro football.

But, because Bobby asked, Joe said yes, and before long he was all into it.  Joe works hard at things he’s interested in and he likes data and research, so he took on the Any Given Sunday (AGS) league with the same commitment to doing it right, just as he does with the New York Times Sunday crossword.

When I started seeing Joe, after living mostly man free for 23 years, he had to explain how it all works.  There's a "draft" some time in late summer and you pick players for your team.  This is done online, all at the same time, with members of your league. You pick your players from any of the NFL teams, taking turns, with last year's loser picking first.  Each league pretty much gets to decide how this part is done; however, according to Joe, in the AGS, Bobby makes all the decisions, based on what will serve him best.

Your team players earn you points each week depending on how they do, even though they are, in reality, playing for their own teams and not yours and they don't know (or give a shit) if you win or lose. And they are not impressed by your Golden Cock.

One of the great things about fantasy football is that you get to make up the name of your team, and I would say that whatever you name your team says a whole lot about who you are.  For example, Joe's team name is Mojo Hand Cutters, which is some marriage of an old Grateful Dead song and a vague nod to those nasty cigars he smokes, and Bobby's team name is Lord Business, after a character in The Lego Movie.

Another great thing is that they let girls (Joe's term) play.

AGS has two "girls".  One is Heather, Bobby's wife and the other is Christine, who is married to Ryan, another member of the league and last year's winner.  Both Heather and Christine graduated from Georgia Tech, but they are still "girls" to Joe's way of thinking.  Now Heather and Christine, both being "girls" give their teams somewhat girly names.  Heather's, at one point, was Brady's Baby's Mama because of Tom Brady's lusciousness.  Christine, who birthed not one but two children during her years in the league, gave herself the moniker Baby's Breath.

As I said before, Joe works hard where his interests lie and fantasy football is no exception.  So you can imagine his disappointment and consternation when Brady's Baby's Mama and Baby's Breath each won first place during a couple of seasons when he, himself, was languishing in both the bowels of despair and the standings.   Not only that.  Baby's Breath was known for "talking smack" to Joe when they met in public.

Then the worst thing happened.  Worse than having "girls" win.

At that point, Joe just wasn't sure he could take any more.  He was thinking about joining a knitting circle, a world where women know their place and sons don't try to outshine their fathers.

However, this year was different.  It was Joe's year.  He had an extra spring in his step and a twinkle in his eye as the season progressed.  One of the main reasons was that he'd included Odell Beckham in his line up in mid-season.  I've since learned (via what seems like hours of Joe droning on about it) that Mr. Beckham was, this past year, a rookie split-end who plays for the New York Giants, unwanted by anyone else in the AGS league, and Joe, being the generous soul that he is, decided to give him a chance.

Well, Beckham went crazy and had a great year, and by, osmosis, so did Joe, especially during the playoffs, when Odell offered up 36 points and  Mojo Hand Cutters beat Lord Business in an riveting final game.

The cock was Joe's!

Getting the rooster from Ryan wasn't so easy.  Ryan kept "acting" like he was willing to give it up but appointments were cancelled and meeting places appeared clandestine.  Finally, he agreed to meet us at some backwoods BBQ joint in spitting distance of I-285 on a Sunday around noon.  We were worried that no one would ever see us or the cock again.

But justice prevailed and the foot-dragging chicken hoarder showed up with the rooster in a Whole Foods bag.  Although Ryan had a hard time letting go of his cock, we made the exchange and I lived to tell the story. 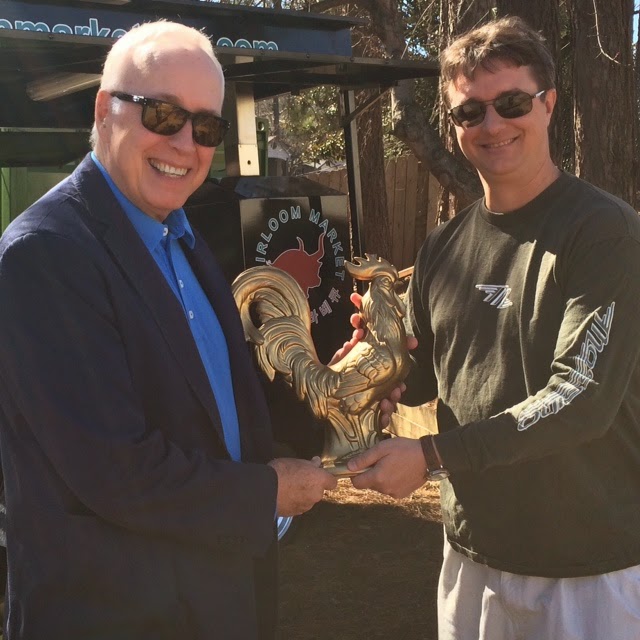 Joe and Ryan hand off the cock.
You can tell by their attire that Joe was taking
the exchange much more seriously than Ryan.
Joe firmly believes that the cock needs to be disguised and protected in some way as to keep it safe from theft or even annihilation by rabid league losers, especially that trash-talking Baby's Breath.