One of the things I was doing while I was on blogger hiatus was finishing up a book I wrote to help my second grade students learn about and better understand the history of Atlanta.
Several years ago, I was visiting The Atlanta History Center with my class when the docent mentioned the Civil War battle that later became known as the Battle of Peachtree Creek. At that point, several of my students remarked that they live on Peachtree Creek. I was excited to think about the historic connections they could make between then and now, but later, I realized that they still thought history happened some place else and not where they currently live.

And so, I created six fictional kids, each living in the same place on Peachtree Creek, each sharing a secret for over 200 years. The secret has to do with the history of Atlanta. Tuck was a boy who lived in the Village of Standing Peachtree in the late 1700s; Susannah, an early 1800s settler with a secret best friend who happened to be Cherokee; James, a maybe slave who set out with his father to join the Union Army during the Civil War; Rosie, a factory worker from Whittier Mill who was visiting her seamstress aunt in the rich part of Atlanta in the early 1900s; Carl, a black kid helping his father build houses in White Atlanta as he worried about the changes the Civil Rights movement would have on his personal life; and Frances, a current Buckhead kid, who gets the story started and finishes it up at the end.
I believe the book turned out well and I’ve gotten good responses from kids, parents, and teachers. However, one of the most exciting aspects of researching and writing the book is what I learned about the history of my new home town. Being from Savannah, the City Too Beautiful to Burn, I believed that all of Georgia history happened there – other than that stuff I read about in Gone with the Wind when I was seventeen. But now, in learning about the native peoples who once lived here and the early settlers and the Siege of Atlanta and the mill towns now within the city limits, I was reminded that, by creating human faces to go along with the history, I was better able, as the author, to internalize it. And that, of course, is what I wanted for my students.
Based on all of the wonderfulness described above, if any of you would like to order the book for your children or grandchildren or nieces or nephews or the kid next door or that one you saw at the grocery store or the school in your neighborhood or any other school any other place, you can find it at amazon.com for a mere $6.99. Here’s the shameless link.
at March 17, 2012 13 comments: 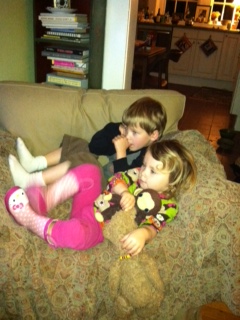 TV:  The perfect Grammy!
I was excited they were going to stay with me. Their mama, my daughter, was having a birthday and she and her husband hadn’t had an evening off in quite a while. Miles is four and Georgia is two and they are my grandkids and I love them. They can be a handful, but hey, I have three degrees in Early Childhood Education, so what could be the problem?  Plus, it was just for 24 hours. How hard could it be?
We had a nice birthday party for Melissa, cupcakes with sprinkles. So, a few sprinkles landed on the floor. I’m not that clean anyway, plus I was also going to keep Lou, the bulldog, and he was already on KP duty, snorting up the tiny candies with his inverted nose and then sneezing. I did notice that Melissa and Trevor, the celebrating parents, seemed to be a little too eager to leave and they left no forwarding address, only a vague reference as to where they might or might not be if I needed them.
For the first hour or so, everything appeared to be going fine. Miles is just a tad addicted to TV and his mom and dad try to limit his time in front of the screen, but, since Georgia was so busy with so many things, I decided it would be okay for him to have a Disney marathon for a couple of minutes (hours) to comfort him while his parents were away. Georgia and I cooked and read and drew pictures and put her bear, Beary Manilow, to bed several (a ridiculous number of) times, while Miles watched what I was certain (assuming) was educational viewing. At some point, Georgia’s science experiment having to do with pouring her milk from one cup to another got a little out of hand when I saw her conducting it all over my living room floor, but I took care of that by taking it away from her.
The day was chilly and windy, so I thought we would just snuggle at home and have a quiet afternoon watching the Disney marathon and reading several (about 10,000) books. At some point around 23.13 minutes after their parents had left, Georgia was in my lap helping me type on my computer when Miles emerged from his educational (stupefying) reverie with, “Grammy, the TV won’t work.” I put Georgia down and went to the television and saw that, indeed, the screen was black. As an electronics genius, I went into my normal fix-it mode by turning the set off and then back on, sure that all would be well.
It wasn’t. The screen was still black. I checked to make sure everything was plugged in. It was. My next (and last) step was to look at the cable box. I noticed that its little light wasn’t shining, so I turned it over to see if there was a power button. There wasn't. However, what there was was milk pouring out of the slats on the top the cable box.
I'd like to say it got better.  It didn't.  I decided that, without TV and even though it was really, really cold, we might as well go to the park, which would also give Lou the chance to do his business.
Lou did his business all right, scratching up sweetly-budded blooms just outside my door in the newly planted garden paid for and overseen by our condo association.  Good neighbor that I am, I had my Publix bag with me, along with my keys and my phone and Miles and Georgia and don't forget good old pooping Lou himself.  Because I didn't want to walk them all around to the back of my building to throw the bag of poop away, I decided to take it with me to the park, confident I would find a trash can along the way.
I didn't.  I ended up carrying that bag of poop with me every step of the way to the park, at the park, and home from the park.  "Swing me, Grammy!" Georgia would say and I would swing her, bag of poop in my hand.  "Help me with this, Grammy" Miles would say, and I would help him, bag of poop in my hand. Lou would chase another dog through the park, his leash dragging in the mud.  I would chase him, bag of poop in my hand.
We finally made it back home, cold but maybe a bit tired, Publix bag happily ensconced in one of the trash bins out back.  Being the good Grammy, I made them supper. Miles ate about seven croissants and two boxes of raisins; Georgia ate a leftover bag of bar-be-cued potato chips.  I got them bathed and ready for night-night (thank God), blowing up the blow-up mattress and placing it at the end of my bed, happy to know they would feel safe and loved, near, but not on top of, me.
It didn't work out that way.  Georgia ended up in bed with me, sleeping sideways with her feet in my face.  Miles, at some point, rolled off the blow-up bed and slept on the floor.  Lou, however, enjoyed the squishiness of the air mattress, sleeping in the middle of it all night, his toenails tearing at the plastic casing, snoring loudly enough for my downstairs neighbor to hear him.

The next morning was better as we ate blueberry muffins and two more boxes of raisins and Miles found Nick Jr. on my computer and I brought 700 new books in from my car to read to Georgia.  That's until Miles pulled himself out of his reverie to say, "Grammy, the computer isn't working."
It wasn't. 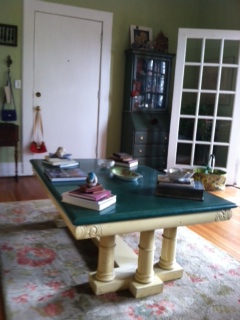 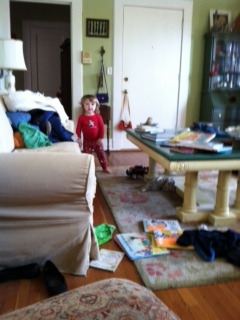