Neither Joe nor I can cook, although he can grill up a mean steak in his back yard or even in his kitchen with George Forman at the ready.  However, at some point after we started hanging out, we decided we needed something to go with the steak, so our first foray was into the realm of the baked potato.  Now, I know how to cook a baked potato as I eat them all the time.  However, I believe God would never have invented the microwave if He’d not wanted people to “bake” their potatoes in one of them.

Joe disagreed, being the Yankee purist he is.  He said we needed to bake our baked potatoes.  That’s when the degrees argument ensued.  He said 400 for an hour.  I said 350 (because basically 350 is my setting of choice for all cooking).  I won and what we won was a rash of rawish potatoes after an hour.  Joe was smug and said he told me so but I just put the potatoes in the microwave for a few minutes and that way I won again.

Next we tried quiche because Joe is a Francophile, plus I guess he feels manly enough to withstand any aspersive remarks toward said manliness based not only on his quiche eating but also his quiche cooking.   The quiche was good and we ate it for the next three weeks.

Next, we decided to take a cooking class.  Again, because Joe thinks he’s French, we chose the Spring in Paris Hands-On Class at the Cooks Warehouse in Decatur.  It started at 6:30, which is not only late for me to cook or eat, it’s also past my bedtime.   However, I womaned up and we set out for the class (after stopping by Taco Mac so Joe could get his free beer glass because it was Free Beer Glass Night).

Our class consisted of 12 participants in two groups, a bevy of sweet volunteers, and Chef John Wilson, who was not only not French, he was also a bit of an ass.  Our group had Joe and me, an adorable mid-20s couple who were just moving in together, a woman who was a history professor at Agnes Scott, and another woman who just liked to cook.

Chef John yelled a lot, although I don't entirely blame him.  He had an ambitious menu and 12 morons in the kitchen, people who couldn't follow directions very well.  The menu consisted of:

Chef John was an equal opportunity yeller and we all caught some of his wrath; however, I was the only one he told to step away from the stove and to "go stand over there."  Somehow, though, having John abuse us only brought our group together in that weird common foe way.   And the class was really fun, although I think we should wait until after our instructor retires and opens that bed and breakfast he's planning before we show up for another one.

Since the class, we haven't used anything we learned, although Joe spent about thirty bucks on a Madeleine pan and a lemon zester.  We did cook a pot roast (at 350) in 80 degree weather a few weeks ago.  It took us all day but tasted good and certainly warmed our bones.  We still go to the Waffle House for breakfast most days and supper is often a bag of Lay's Salt and Vinegar potato chips.

I can't remember the temperature for baking Madeleines.  I wonder what Chef John would say if I were to tell him I just cook them in the microwave.
at May 25, 2013 7 comments:

MeeMaw has a Boyfriend 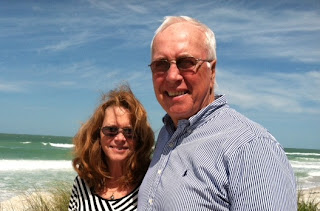 In one of my crazy books written years ago, I talked about how tacky is was for someone named MeeMaw to have a boyfriend, meaning that a geezer woman needed to either hang in with the old fart she married when he was still young and cute or to be happy in her MeeMaw status, sporting roll-down stockings and keeping the cookie jar full.

And when I became a grandmother myself I fully subscribed to my earlier stand, although I can't bake and I don't own a cookie jar.  I even wrote a blog post about how lacking I was in any interest in the romantic arts.  (See That Dog Still Hunts)

Until now.  I’m here now to tell the world that MeeMaw (in my case, Grammy, me, Marcia) has a boyfriend and his name is Joe.

Joe was my boss twenty years ago and his wife, Mary, was my friend.  When Joe’s beloved Mary and my adored brother, Sandy, died within just a few days of each other, we were both left wondering if that was it for us.  Would the rest of our lives be spent in lonely waiting for our own sad ends?

Enter Facebook, that newfangled arena for reuniting old people, and the rest is our own personal history.  We have liked and loved and lived and laughed and yes, lusted (sorry kids) in a powerful way, and I have to take back most everything I said about sex in our later years.  What we lack in prowess is made up for with some wisdom and great humor.

So now, we are trying to figure out how to make it work, to love each other while still taking care of our children and grandchildren, to balance the me and you with the us, to look forward to the years we have and to prepare for the time we don’t have.

We feel very lucky to have (re)found each other at what might have been considered too late a date. Lucky and happy.