I just renewed my teaching certificate for the eighth time, which means I've had nine certificates, with this newest one being good through 2016, for a total of 45 years of teaching certification. In the state of Georgia, you must be certified in order to teach in all public schools and most of the private ones. A certificate is good for five years and, at the end of every five years, you have to renew it. The requirements for re-certification usually include evidence of staff development and that you haven’t done anything dastardly to a kid.
But this story isn’t so much about my teaching. It’s about my life. My nine certificates, so far, have spanned 40 years, my entire adult life, and thinking about each one takes me back.
My first certificate arrived in 1971, along with my 21st birthday, my college diploma, and my marriage license. I thought I would teach for a few years until my children came along, and then I would morph into a full-time mom, baking and ironing and donning high heels when hubby came home from work. I remember my mother telling me that I needed to have a college degree in case my husband died and I had to support myself. For that first year after we married, Gary was finishing up Pharmacy School at the University of Georgia and I taught first grade in Barrow County.
In 1976, I renewed my certificate for the first time. By then, Gary and I had moved to Greenville, South Carolina, where we'd had our first born, Melissa, and had then moved back to his home town of Warner Robins, Georgia because his father wasn’t doing well and his mother had just died. We couldn’t sell our house in Greenville, so we lived with Gary’s daddy for about six months. It was during that time that I became pregnant with Billy, which I remember as being a big surprise.  Now, I'm also a little surprised that I bothered to renew my certificate at all,  since what I was intent on at the time was birthing babies and decorating nurseries.  I do remember Gary looking at me in the grocery line one day and saying he didn't know how we were going to make it financially if I didn't go back to teaching.  That's about the time I realized the rules for women had changed from when my mother had given me her college-degree advice, and so I began to re-think my life plan. 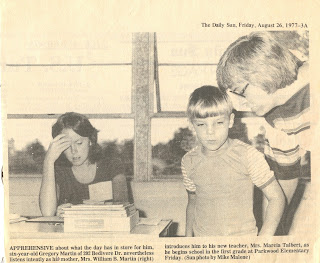 My first day teaching after having kids.  Notice the open window.  It was late August with no air conditioning in the schools.
In 1981, during the time of my next renewal, I was teaching full time, I’d just finished my Master’s Degree, and I could tell that something had shifted in me. I was no longer a mother who happened to be a teacher. I was a professional woman who also happened to be a mother. That was also about the time I decided I wanted to go to law school, so I took the LSAT and did quite well, leading me to apply to law school at Mercer University. I was accepted but ultimately decided not to go. I didn’t really want to be a lawyer; I just wanted to have the opportunity to keep on going to school. 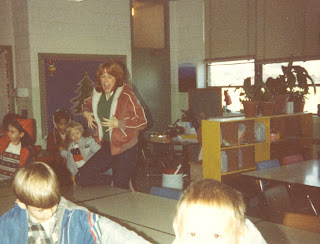 This pretty much sums up my educational philosophy both then and now.
My son, Billy, was in this kindergarten class.
Five years later in 1986, I received my fourth certificate in the midst of working on my Specialist’s Degree and just before my third child’s second birthday. Molly had been a bit of a surprise when she'd arrived, but, although I was certainly happy to have her and loved her just as dearly as I loved the first two, her wonderfulness didn't stop me from my commitment to moving up within my profession.  She probably wouldn't have survived if Barbara, our neighbor, hadn't stepped in to be my much better suited stand-in.  Then, in 1987, I was offered my first out-of-classroom assignment, a job that had me traveling all over the state, training teachers in an early childhood program.  I was pretty full of myself by then and it was wearing on my marriage. 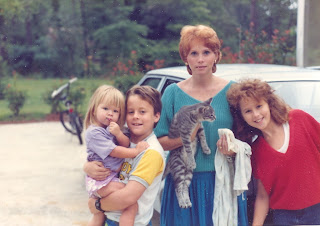 The professional woman juggling work, kids, Molly's blanket, and a cat.
By 1991 when  my fifth certificate arrived in the mail, I was in the midst of a divorce and a doctoral program.  I wasn't traveling as much with my job, but my degree quest had me engaging in a 240 mile round trip to the University of Georgia at least one evening a week.  In 1993, I became an elementary principal, a position I kept for five years.
In 1997, one year after I received my sixth certificate, I finished my Doctorate in Educational Leadership and started my quest to see what my next job would be.  The Dean of Education at Georgia Southwestern State University called and asked if I wanted to join the faculty there.  I did,  and so I left a job paying $80,000 a year for one paying about $52,000.  Although my life as a college professor was much less grueling than my life as a principal, the pay sucked and at some point I realized I'd educated myself into a much lower paying job.
Year 2001 brought an attack on America and my seventh certificate.  I was still at the college and enjoying it, but I worried that my relatively low salary would affect my retirement benefits, so I checked around to see if I could find a job with better pay.  That came with the Department of Education and a move to Atlanta in 2005.  I loved Atlanta but wasn't crazy about the job and what I really wanted was to teach children again before I hung up my professional hat..
By 2006, I had a new job teaching second graders in a wonderful school in Buckhead, which brought renewed meaning to my seventh renewal and my eighth certificate.  I'd come full circle and was back doing what I'd set out to do back in 1971.
So, here I am to now, with my ninth certificate, which came to me the same week as my 61st birthday.  For the first time, it wasn't mailed.  Instead, I had to download it from the Professional Standards Commission website before I could print it.  One of my young teacher friends seemed perplexed as to why I needed to print it at all since it was safely stored on the PSC website.  She didn't know about the other eight, safely kept in a drawer in my living room, evidence of a well-lived (or at least well-intended) life.
I've been contemplating retirement of late, but I'm now thinking I  might stay on a while longer since I still enjoy my job (most days).
After all, I'm certified for five more years. 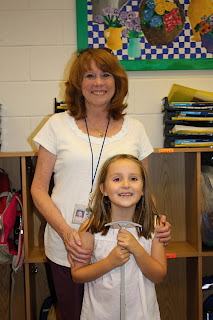 How could you not love working with people this size all day?
at February 20, 2011 26 comments:

Why I Can’t Get Any Blogging Done

Today is a school holiday, a free Friday, and while my young teacher friends have taken off to exciting places like New Orleans or the beach, I thought that I could at least get my blog posting done. One I’ve been working on for over a week. This isn’t it.
My current (other) post is about my adult life based on my nine teaching certificates. It’s relatively boring but that won’t stop me from putting it out there as soon as I finish. I did decide that including some photos of me during those times might at least offer some levity. That’s what got in my way today and began my long list of things I’ve done so far that have kept me from finishing that posting. They include:
Note:  I did change out of my pajamas and put on my bra before I left.
at February 18, 2011 15 comments:

Felicity and the Birthday Cheese