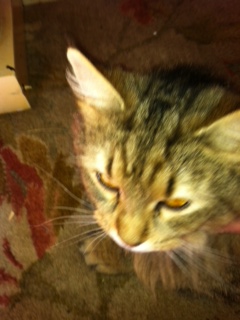 Several years ago, my daughter, Molly, and I lost our beloved dog, Sugar, to a wild dash from the side door that lead to a hit-and-run death.  In trying to get over the loss of Sugar, Molly adopted a very nice cat she named Brody, the name an homage to the actor Adrien Brody because of the cat’s rather long nose.  At some point, we cutely called Brody our Sugar substitute.

Fast forward to now.  Somehow, I woke up last Saturday morning with a brand new cat, whom I finally named Roxie because of, well I don’t really know why other than she likes to play cat hockey with errant rocks she finds on my window sill in the middle of the night.

My life was really simple.  Living alone, things stayed where I put them even if I couldn’t remember where that was.  I had the freedom, if not the money, to travel and stay a while.  Vacuuming could wait another six months or so.

And it wasn't that I was lonely.  I have children and grandchildren who love me and even like me most of the time, and friends who put up with me, and interests and pursuits and favorite TV shows.  All the things that make life worth living.

So why a new cat now?  Why the cost and the aggravation and the responsibility, not to mention cat hair everywhere and that catbox smell?  The only reason I can think of is that I’d recently lost my brother, Sandy, not to a quick death under the tires of a Toyota but to a long battle with cancer, a war the cancer won.

So, was it possible that Roxie could become a Sandy substitute?  At first glance, it was iffy.

Whereas Sandy was trim and well groomed, Roxie is fluffy and a bit disheveled.

Sandy never ever walked over my computer keys while I was trying to type.

Sandy was quiet and careful not to offend, whereas Roxie raucously meows her opinions about everything (mostly in the middle of the night).

Roxie bites me; Sandy never did.  The worse thing Sandy ever did to me was to infiltrate my diary when I was fourteen to write in it that he needed a bra more than I did.

Sandy was independent, while I have to do EVERYTHING for Roxie.  I have to feed her and give her water and clean out her damned sandbox and lug up her 100 pound bag of litter while she tries to trip me.

But I guess somehow, in spite of all the trouble and probably for all the wrong reasons, I can feel this cat beginning to patch up that big hole in my heart.  She looks as happy as a cat can look when I come home, and she purrs when she feels like it, and I'm fairly certain her escapades will give me something new to write about.  And though there will never be a substitute for my only sibling, someone who knew me from when I was a tiny orange-haired baby and truly loved me in spite of myself, this new cat of mine makes me laugh and gives me someone to talk to in the morning and helps me forget that I am now a brotherless child.