Dinner at the Colonnade 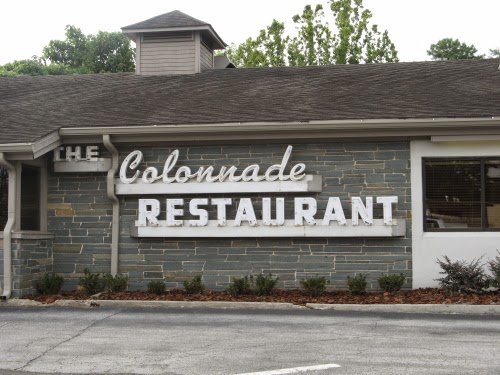 Joe had never been, so we went.  I had been before, but I went again.

We had recently read that the Colonnade is one of those iconic Atlanta restaurants every Atlantan should visit at least once, so we did.  We took the scenic route, from I-85, down Cheshire Bridge Road, past the Tara Theater, the Original Pancake House, the sex-toy shops and strip clubs, and an apparel store called Fresh 2 Def, arriving in record time.

We knew that the Colonnade is a favored dinner destination for both the Gays and the Grays.  We also knew that the Gays don’t arrive until later and the Grays go early.  Since we aren’t gay, we went early.  However, we miscalculated our time and got there at 4:40, which is early even for the Colonnade.  So, although it wasn’t officially Happy Hour in our time zone, we decided to stop at the bar and have a drink.  The bar, itself, wasn’t added to the Colonnade until 1982 and that must have been the last time it was decorated.  The walls are covered with book shelf motif wallpaper for that fake library look, whereas the restaurant, itself, is more hunt clubbish. 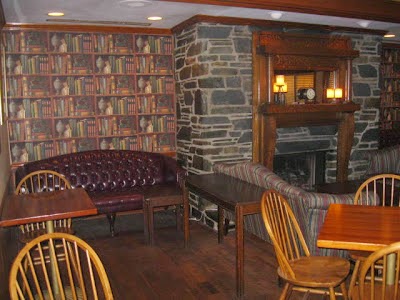 Joe was sad that there was no draft beer to be found in the Colonnade bar but he made do with an Alagash Black from a bottle.  I, however, already knew that they had Jack Daniels and Diet Coke, which was one of the main reasons I wanted to go.  Joe picked up a basket of chips from the bar, along with our drinks, and brought it all to the table.  I do believe the chips must have been part of the original décor for the grand opening in 1982, and there may or may not have been a synthetic, polyester-like, onion flavor languishing in their aged carcasses.  As stale as they were, we managed, with minor chewing and major complaining, to put them out of their misery before we finished our drinks and retired to the dining room.

The host who seated us at our cloth-covered table was friendly, as was our waiter, Eric, a courtly black gentleman who knew his way around the dining room AND the Early Bird Dinner menu.  Other than Eric, there wasn’t a single person there under 60, with white heads shining like beacons and bald pates adding additional luster to the surroundings.  According to Eric, Early Bird Dinner is Monday through Thursday from 5 to 6:30, and we could see it was quite the deal.  No wonder there were so many liver-embellished hands gripping the daily insert and rheumy eyes reading the large print, ours included.

Sitting near us was an unusual looking duo, even for the Colonnade: two men, most likely not gay as it was too early, both sporting longish white hair combed back, one with a robust beard and the other wearing faded overalls.  At first glance, I took them as OTP (Outside the Perimeter of Atlanta for those of you who are OTP).  At second glance, I thought they had to be way OTP, maybe from Barrow or Effingham County.  However, at first eavesdropping, I realized that, at the very least,  one of them, the one I could hear, the one in the overalls, had the language and cadence of someone learned, perhaps a retired professor, now free-range turkey farmer,  or an oddball poet.

To which Joe said, “I don’t know what pole beans are.”

And Eric offered, wryly and ruefully rolling his eyes, “Oh, we sell a BUNCH of pole beans!”

Dinner turned out to be just great in spite of our rocky start with the aged chips.  Both the chicken and the chicken-fried chicken were superb, with just the right amount of lard and salt, and the mashed potatoes were real potatoes with a few lumps thrown in to make us believers.  Furthermore, the green bean casserole was cheesy and Joe ate all of his pole beans.

But the biggest surprise came at the end when Eric told me I got a dessert with my Early Bird dinner and the evening’s offering was apple cobbler topped with vanilla ice cream!  I was nice enough to share my Early Bird dessert with Joe even though he didn't really deserve it since he hadn't ordered from the Early Bird menu.

As we were leaving, I overheard the professor/turkey farmer/oddball poet say this to his dining partner as they were finishing up their dinner:

“The worst thing that ever happened to the South was not the Civil War.  It was the death of the chestnut tree.”

As Joe paid the bill, I took five mints from the dish next to the cash register, using the tiny spoon.   One white, one green, one yellow, and two pink, I ate them all.

When we returned home, I googled “death of the chestnut tree.”

The best part of the Colonnade is side of their drinks and the price. Best bargain in Atlanta.

Oops, that is size not side

I believe YOU took me there once.

Joe's Allagash beer? I think it's a Maine beer. The Allagash is a region of Maine, lots of trees and water and wildlife. Just thought you'd like to know. Tell him to try Geary's Pale Ale or a Seadog beer some time.

All epic stories end with a dramatic death! Great it was not the diners and if it be a chestnut tree; so be it! Bravo! So good to read you once more, Marcia!

Thanks Jean and Cile! Jean, I passed your Allagash message on to Joe.

I did not know you came back to blogging – welcome back! We went to the Colonnade maybe 10 years ago, but not to the bar. As you mention, the food was good. The guests were half grey and half gays so I am not sure at what time we went! Nice to have you back.