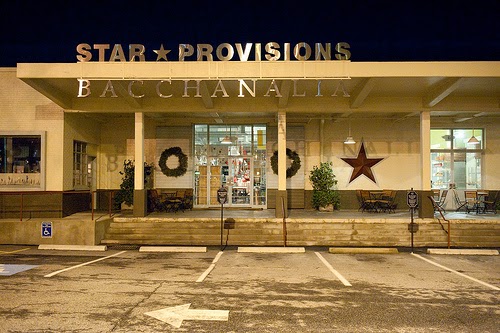 When Joe asked me where I wanted to go to celebrate my sixty-fifth birthday, I think he was hoping for Free Beer Glass Night at Taco Mac, but I picked Bacchanalia.  Bacchanalia has been on my radar since I first moved to Atlanta and saw it at the top of every list of best restaurants in the metro area.  I became even more interested the first time I happened upon Star Provisions with my friend, Nancy.  Star Provisions is owned by the Bacchanalia folks and it is made up of a darling set of small shops where you can buy wine, cheese, meats, and gifts for any foodie or foodie wanna-be.  You can even grab a deli sandwich and a pickle there and eat on the premises, which is what Nancy and I did.

So I chose Bacchanalia and sweet Joe agreed, even though he knew it was pricy.  They have a prix-fixe menu, which means that, once they get you in there, you aren’t getting out without some pain to your pocket book or an attempt to sell one of your grandkids.  They also have wine pairings for each of their five courses, glasses of which they will be happy for you to purchase in addition to the five courses for which you are already paying an astronomical amount.

In addition to worries about the wine and the bank we were going to have to rob to pay for our outing, we also couldn’t quite figure out what to wear.  We didn’t want to look like Bacchanalia virgins so I nixed my evening gown and rented tux idea.

We eventually decided to dress somewhat up but not way up, hoping not to stand out, and arrived a few minutes early for the first seating.  But even as early as it was, it looked like the lights were out in Star Provisions.  Had they closed early in honor of my birthday?

Perhaps because of the darkened demeanor of the Star Provisions entry,  and instead of listening to logical birthday-girl me and trying the door, Joe decided to take it upon himself to see if there was an alternative entrance.  Before I knew it he was jiggling the back door of Bacchanalia of all places, where the entire waitstaff was collectively hiding, trying to enjoy their last sane moment before the wild rumpus began.

To their credit, the waiting/hiding waiters were kind about our faux pas and assured us that they would escort us to the front door, and that we weren’t the only ones ever to arrive through the service door. So there we went, in our middle-best clothes, the only people not dressed in white toques and starched jackets, being guided like little lost lambs to the front, to the place we were supposed to be.

Because we were early and a bit unraveled, we opted to sit at the bar and have a drink before being seated at our table.  The first thing I noticed was that the décor wasn’t at all what I had expected,  based on the name of the establishment.  When I think of bacchanalia, I think of Rubinesque opulence.  This Bacchanalia was minimalist, with sand-colored ceramic-tiled walls and simple shades instead of heavy draperies.  Aside from the large window giving us a view of the kitchen with prep underway, the only other decorative touches were two large paintings.  The one closest to us was of a woman who was working in the field (perhaps picking our second course?) with a tiny unformed head  and  her body large and square - Picasso-esque at the top and Diego Rivera-ish at the bottom.  And, as Joe pointed out, she wasn't wearing any panties.

After we finished at the bar, we were led to our small table, and that’s where the coddling began.  Reams of people kept stopping by and offering us delectable things.  This gifting reminded me of the times my cat brought dead or dying rodents to my door, lovingly placing them on the mat for me to enjoy.

Water?, bread?, another drink?, an amuse bouche?, more bread?, more water?  Then, as our heads were beginning to swim what with all the water, the main attraction lady came by with the menu, the dreaded menu with five choices for each of five courses along with the wine pairings!  She quickly put us at ease, however, explaining how it all worked and how we didn’t have to have wine if we didn’t want it, sweetly indicating that they wouldn’t be laughing their asses off at us back in the kitchen, with our firstly not knowing where the door was and secondly refusing their perfectly-paired wine.

The meal was lovely, with each of us ordering different dishes for each course and tasting the others choice.  And, because it is what they call a "tasting menu" we were able to enjoy each delectable bite without puking.

They even brought me a tiny cake with Happy Birthday written in perfect chocolate penmanship on the plate because Big Mouth told them the occasion.  And they didn't make me stand up while the entire staff marched out singing and clapping like they do at Golden Corral.

After Joe paid the three hundred dollar bill (including tip)  and we were leaving through Star Provisions like we were supposed to do, I noticed  a group of people sitting at a farm table, eating bread and cheese from the cute bread and cheese shops and sharing a bottle of wine from the wine shop.  At first I felt a tad duped in that I was pretty sure their meal wasn't costing them as much as ours did Joe.

But, then again, they didn’t get to see the lady with the tiny head and no panties.

A once in a lifetime experience! happy Birthday.

I was chortling well before I got to the panties. I completely lost it at the coddling segment of your nonconformist (of course) restaurant review comparing the early offerings by elegant staff of this much praised restaurant to your cat's lovingly presented rodents. That image was priceless.

Nice to see you back in blogging action. Thanks Joe.

I really hope the 300 busks were worth the experience. When are you going again?