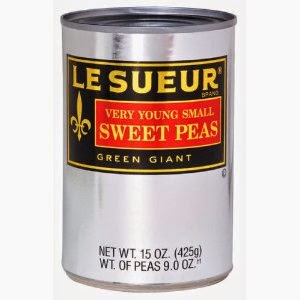 Mother love takes many forms.  One of the more common ones is cooking for the family.  Although it seems that, nowadays, as many dads as mothers serve as primary meal preparers, back when I was a child, that job, along with most others having to do with hearth and home, fell to the woman.  And that woman, at least in my neighborhood, proudly saw cooking as central to her identity and vocation.

Not so much my mother.

At Mama's funeral in 2003, my brother lovingly began his eulogy with “There wasn’t a can our mother wouldn’t open to feed her family.”

Mama was a modern woman, an Army lieutenant  who served as a physical therapist in Australia during WWII.  And, being a modern woman, Mama loved new technology, including those newfangled aluminum containers called cans.  If food could sit on a shelf for months or even years without going bad, it had to be good.

Although Mama maintained that anyone who could read could cook, she was the living embodiment of that untruth. She was a smart and interesting woman but her genius didn't run to the culinary arts.

Mama just wasn’t interested in cooking.  She was interested in fishing and crabbing and painting, and sewing and knitting and refinishing furniture, and whatever else took her fancy, like learning to play (badly) the small organ she set up in the breakfast room.  This alternative use of a space designed for enjoying meals  provides insight as to the place food held in her psyche.  Mama was one of those “eat to live” as opposed to “live to eat” people.

My mother was also an outsider.  After all, she wasn’t from Georgia.  She was from Arizona of all places.  Folks knew she wasn't a yankee but they couldn’t quite figure out what she was.  Because of her legacy, Mama wasn’t a southern cook.  She didn’t know about fatback or collards and she wasn’t going to waste any time finding out. She did blame Daddy for not telling her that grits should be salted during cooking to make them anywhere near palatable, but she couldn't blame him for her Sunday Peas.

Every Sunday, if I remember correctly, we gathered around our big oak table in the dining room, eating either oven fried chicken coated with Bisquick or chuck roast in aluminum foil.  And with those enticing entrees, we typically had Sunday Peas, which consisted of LeSueur peas heated up with a pat of margarine.

Other days of the week, we had supper in the kitchen at our red formica table, enjoying Salisbury Steak, which was, in our reality, one giant hamburger patty. Mama gave us each a wedge after she sliced it in the frying pan. We also had Chop Suey, which was made with pork chop pieces and canned bean sprouts.  We, of course, also enjoyed that 1950s staple, canned peaches, pears, or fruit cocktail with the requisite dollop of mayonnaise topped with a scattering of grated American cheese.

I remember that our mother always made my brother and me a Boston Cream Pie for our birthdays.  From a Betty Crocker mix.  We called it Boston Cream Pie Cake because it actually was a cake, and we loved it, especially that instant pudding part in the middle.   Mama’s sour cream pound cake, never much of a hit but something she continued to bake throughout her life, should have been called a three-pound cake.

A childhood friend recently reminded me of the time Mama baked  marbles in the oven.  This was a project for our Brownie troop.  The baking of the marbles caused them to crack in an attractive way and we Brownies were then to glue the marbles to fittings in order to make bracelets.  I can't imagine how she found that idea without Pinterest.

Recalling Mama's bad cooking reminds me of what a wonderful mother she was.   She was kind and creative and loving and brave, and she was a great role model for a little girl (and a grown women).

I think about my mother when I sew or paint or write or think about taking piano lessons, grateful that I had her as a role model.

Not so gratefully, I also think about her when I cook.

~~~
In case any of you would like my mother's recipe for Sunday Peas, please see below.

You might want to add a dash of salt, although Mama never did.

Every single Sunday dinner. Those are some special canned peas. But mayonnaise and American cheese on fruit cocktail? Really? Uhh....wish I could put a green face on here.

Oh it's so good to see you writing again, my friend!

I would add a wee sprinkle of sugar to those peas, LOL

When I was about 7 my mother went off at nights to take cooking classes. I honestly can't remember what we ate before that but AFTER?? Yum

I guess I'm lucky. My mom could cook. I am the one who is still learning to cook. At 72 I am running out of time. Laughed at the oven fried chicken and three pound cake.

I'm glad your Mom didn't waste her time trying to do things she didn't want to do. I think a three pound cake is better than a regular, old pound cake any day. And where would your marbling be without hers? What a fascinating woman...kind of like her daughter, it seems.

Ahhh our mothers were like two peas from the same pod!

My dad did all the cooking and was an amazing cook but very often those very peas graced our table. You took me back a few years.

you forgot that you have to drain the canned peas before adding a pat of marge, surely? Or did the peas come without water?

My mum was a decent enough but totally unimaginative cook. First she had nothing to cook with, of course, then, when food became available she did the dishes she had learned to cook before her own mother died. I never bothered, except to defrost and heat up frozen food for my kids. It was only when I found someone to keep me without me having to work for my own living that I developed and interest in cooking.

Now it’s a hobby. Something I enjoy doing as much as writing or gardening.

Friko, I'm pretty sure she cooked them in the juice. She must have used a slotted spoon to scoop them onto our plates.

I learned something from your post – you have to salt grits before cooking them … I did not know that! As for the peas I saw somewhere that if you add a couple of lettuce leaves to the peas as they warm up they will taste fresher, also add some basil.

My mother was a wonderful cook but she did not like to cook either, but when she did it was good (the rest of the time the maid did the daily cooking.) My father liked Armenian cooking and he taught her some of his favorite dishes but he cooked the rice pilaf. I mix all the cooking styles – French, Armenian, Southern, Mexican and Asian – well, I guess you can call that American cuisine!