Marcia's Spring Break Adventure: Part 6 -What I learned along the way 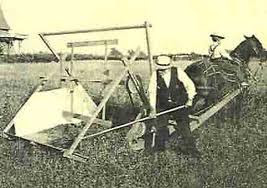 McCormick and his Reaper
I just got home and am happy to be here, but the trip was fantastic and my hands weren't nearly as sweaty driving back as they were driving there, so I guess by using it, I didn't lose it.  And other than proving to myself (and the general driving public) that I can still navigate long distances, I also learned the following along the way:
Bottom line, I'm proud I did it and proud that I lived to tell about it, and I'm proud to have all of you friends who went along for the ride with me.

It was a grand adventure! Mary B

So glad you are home safe and sound! Nancy

Yes, it was certainly a great ride with no stress on my part. Thank you for taking me along!

Ah, you had me giggling again. We have similar bladders. Fortunately my traveling companion Mighty is equally geared. I always tell myself I am stopping for him but take advantage also.
Glad you have decided to keep Tom in his place.
I completely joyed your adventure.

It was fun while it lasted, but there really is no place like home, just as the good witch said. I think it is great that you took on this challenge and had a successful trip. Just wondering if you teach any kind of geography to your second graders?

Your traveling adventure is highly entertaining. Welcome back.

My Tom(tom) is up to no good, I'm sure. When I leave the house headed to town -- keep on the paved road for 10 miles and turn right at the 4-lane -- Tom wants me to turn left on the first dirt road, wind through the country for 3-4 miles and then turn right on the 4-lane because it's 'faster.' What's faster about a one lane dirt road for the first 4 miles?

Sounds like it was a good trip. Glad your sense of humor is still intact.

Happy trails! I'm not sure I'm ready to attempt long solo trip these days. Proud of you for striking out on this adventure AND making it back home. Stops every two hours for hubby and me, too!

That was certainly an epic trip. It takes courage to go on the road with all the crazy drivers (the other drivers) and for 8 states no less. I don’t have a Tom-Tom but a Maggie – she does not have a sense of humor. I like your narrative, you are very funny.

Splendid, and well done, Marcia!
How else would you have learned all you did.

Sorry that you and Tome didn't make a go of it but then, who would want to tie themselves down in a place they know well, better than any Tom, Dick, or Harry.

You did a great job, but as one VERY familiar with the borders of TN and NC, I am wondering how in the heck you went through NC THEN TN after leaving GA. Maybe I fogot, but I think he is dead wrong about the Capital beltway. All the cars trying to get home and truck drivers trying to get to New York, drive in the left lane. Tourists are advised to keep to the right or risk their lives. I think you better be careful with TOM. He tends to get you off the straight and narrow I think. Dianne

I just did a corner of Tennessee going from NC to VA. And you are right, I should have never listened to Tom while on the beltway. A mercedes actually kept honking at me. Olga, our geography in second grade is pretty much all about Georgia, but, because I like it, I talk about it a good bit. I must say, however, that my students actually travel much more than I do.

Wow! That was a great trip! I'm exhausted but happy. Thanks for sharing your adventures in your lighthearted and joyful way, Marcia!

Quite a travel log, Marcia. Thanks for the trip; I enjoyed it a lot. : )

Well, I had to come back and tell you that after I looked at a map Duh!! I realized I was thinking about driving from here to GA. My Dad lived in TN and my Mom is buried in NC (long story) and I tended to get confused. Dianne

Reads like you had s great trip, even if you are going to dump Tom -- you just used him.

Reminded me of years ago when I announced I was driving from Calif. to Colo. accompanied by my high school age dtr. My husband had long since taken over all driving and trip planning and couldn't believe I could make it out of town driving myself though I had been quite independent when we met. We made great mileage the first day out and he couldn't believe where I phoned him from that night. Some unexpecteds on the trip but we arrived at our destination and returned home intact as planned.

I'm a first time visitor and went back and read all of the posts about your trip. It was a very enjoyable, witty saga of your trip. :)

Thanks for sharing the memories and the things you learned. You have a wonderful way of looking at the world. It will stand you in good stead!