Introduction to Looking for Junanto 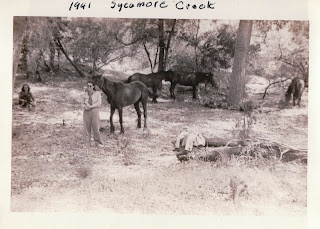 Mama in Arizona, Summer of 1941
Looking for Junanto is the story my mother’s life from December 7, 1941, the day Japanese forces attacked Pearl Harbor, to February 12, 1946, the day she married my father. I’m going to tell it in parts, so as not to overwhelm you with too much to read at one time, or me with too much to think about and organize. Some of it will be in her words, from a taped interview I did with her on New Year's Day, 2000.   The rest will be my interpretation of what her life was like, based on family lore and photographs I’ve inherited. The title comes from the word Junanto, which was written on the back of several of the more interesting photographs. It's a word my mother never used in describing that time and it's a word for which Google was of no help.
Below is from Mama directly:
Well, Pearl Harbor happened. Like everybody, I was shocked to death. I was in Jerome (living at home with her parents in Arizona) and teaching school. We heard it early Sunday morning on the radio. I think I was sewing. And, of course, I had no idea of anything that I was going to do. I was anxious to do something, anything, besides live at home.  Going back to Jerome had probably been s stupid thing to do.
Some time in the early spring, they began talking about training people for different things, and one of them was Physical Therapy. You see, I was teaching physical education and the requirement to take the physical therapy program was that you had a degree in physical education or you were a degree nurse. I read about it first in my professional magazine, and so I think I wired, you didn't telephone then. I sent a telegram asking for further information. They told me I could go to a school in Michigan, Ann Arbor. It wasn't the University. It was a school that was run by Sister Kenny; she was a physical therapist who went from England to Australia, and then she came to the United States. She was the originator of physical therapy in the United States. She had a training program. Anyway, I considered going there, and about that time I heard about the Army program, which was free. And we were to be paid - a pittance - while we were in training.
The first time that I applied, they told me that I couldn't see well enough, and with almost return mail, they sent me a wire and said that it didn't matter whether I could see or not. They told me to report to Washington, DC, a hospital there, almost immediately. Then the next telegram said that they were starting a school in Texas and for me to go to Texas, so I did. But I didn't go until about the middle of the summer. That's when I ended up in Texas at Fort Sam Houston. There were five of us; we were the first class.
So, it seems that my mother joined the Army and began a journey that took her to places I've certainly never been because she was living at home after college and was bored. That, in turn, led to the life she lived for the next five years and ultimately to her marriage to my father and the births of my brother and me.
What if my mother had loved living with her parents after college?  What if she'd done her training in Washington instead of Texas?  What if her eyesight had, in fact, been her undoing when it came to joining the Army?
Our very existence, it seems, is based so precariously on some things falling apart and other things coming together.
And most likely, in many cases, boredom.
at April 17, 2011

What if...that question is always lurking there isn't it?

Isn't that the truth...the things falling apart and the things coming together, I mean. I think of this often and it boggles my mind.

I will enjoy this series, as WWII is a most interesting time in the lives of our parents. My Mom was engaged to someone else when she met my father. The what ifs are awesome. Dianne

I'm looking forward to more of the story. What if indeed? Mom sounds like an very interesting lady.

Marcia, great post and eagerly awaiting next installment. I am having comment accidents lately. I do a comment, hit something wrong and everything disappears, or maybe not. So I'm stopping before I blow something up!

So interesting. I wasn't ready for it to stop. It sounds like your Mom was ready for adventure. The what-ifs are tantalizing. I eagerly await the next installment.

Mary, my mother was adventurous, much more so than I.

Wow! What a great story is unfolding here! I too await further installments on your Mother's journey. However, I disagree with you on one point, Marcia...you are every bit as adventurous as your Mother. You are a cyber-pioneer in story telling and a champion for children often going where angels fear to tread in teaching them. I call that Plenty-O-Moxy.

Thanks, Cile. I think you have moxy too.

I seldom think in terms of "what if's" I just accept that I am where I am supposed to be at any given moment. Don't necessarily understand why but accept it just the same. I love the story and admire your mother's sense of adventure as well as your own.

The 'what if's are fun to explore but they never lead anywhere. Much better that what happened happened and led to me reading about your wacky life and now that of your mum.

Ah Marcia, I am clapping my hands together like a five year old. A new story! I can't wait for the next chapter. It's so fascinating to hear all of our stories and even more so the stories of our parents and grandparents & as far back it all goes. There's a good chance that most of us don't think about being the sum total of who and what has come before us - our invisible history. But we can't go back that far anymore than we can go a few generations ahead and see what that will look like. Interesting.
Waiting for the next installment.