How many things are wrong with that?
Whereas Atlanta has its Purple Dress Run, Portland has The Naked Bike Ride. The Purple Dress Run is an annual event sponsored by the Atlanta Bucks Rugby Football Club. It’s actually a pub crawl, and their website touts it this way:
“Put the Atlanta Bucks in purple dresses and run them from bar to bar, and it’s no prim-and-proper Southern cotillion. The burly Bucks and their supporters don their gay apparel Saturday for one of the rugby team’s two biggest fundraisers of the year.” 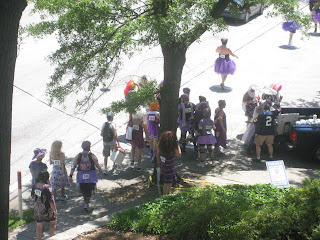 Photo taken from my Sun Room Window in Atlanta
So you get it. Burly gay guys dressed in purple dresses and careening from pub to pub to raise money for AIDS awareness, etc. Although often in sequins and boas and size 14 stilettos, they are clothed, at least mostly.
Then on to Portland's Naked Bike Ride. Here’s some info about the latest one:
"The World Naked Bike Ride took to the streets of Portland Saturday night, exposing the city to a reported 13,000 cyclists who in turn were exposing themselves to the city. In spite of a cool evening, cyclists rode with little or no clothing, staying warm with exertion and camaraderie."
Still lots of alcohol involved and a good cause, this one to protest against society's reliance on automobiles and Big Oil.
I can see myself taking part in the Purple Dress Run (as long as I didn’t have to run). I’d actually be one of the better looking participants, trust me. But as to the Naked Bike Ride, please see below for just some of the ways this is wrong:
But what I find most wrong about Portland's Naked Bike Ride is the point they are trying to make, that of protesting our over-reliance on automobiles and Big Oil.  Nothing makes me want to climb into my big old gas guzzling car fully clothed more than considering the alternative of Riding a Bicycle with my Sixty-One-Year-Old Completely Nekked Body on a Cold Spring Evening in Portland, Oregon.  Or any place else, for that matter.
at June 22, 2011

Great laugh. Participating will never be on my bucket list.

Now that's an interesting tail - tale! I think I'll keep mine to myself.

That's funny because I was just talking with a friend about the annual nude bike ride in Burlington, VT. I think that Portland and Burlington must have quite a bit in common.

That is so funny and more so that people actually do that. It really would inspire you to become the lead dog.

Can you imagine riding in it with a 70 year old on a tandem bike. Makes me shiver thinking about it. I do wish I was there as the official photographer for the event.

Like you, I can't ride a bike wearing a tri-level Attends, much less bare. The whole idea gives me the frizzikins. Bad weather apparently has lasting effects.

Count me out of the purple dress run.
About the naked bike run - uh, do men have a special cupped-front bike seat? I mean, after all, things can hang over.
I do think these crazy people doing crazy things are not at all crazy - too straight is too straight and it's good to color outside of the lines -often.
Would I ride a bike naked? Don't know. I WOULD need a pillow on my seat (no cups)
and it would have be be an over 60+ group of nut-cakes. Will I see you there?

I'm so glad I've never had the opportunity to witness the Naked Bike Run!

I could take contributions NOT to ride and expose this sorry 61-year-old body to the whole world. There are enough eyesores out there. I bet I would raise a lot of money...

So, are all the riders men? Frankly, I can't see females doing a naked bike ride on a cold or hot evening,

A lot of these stunts are for effect rather than a good cause and you certainly need to be a bit of an exhibitionist to take part.

As for the view, I'd not fancy seeing the endless sliding of a mound of flesh from side to side on the saddle.

I have just thought of something even worse: that mound of flesh on a narrow racing saddle. Do you see what I see?

Friko, many were women and a few had fully clothed children with them. Just google Portland Naked Bike Ride images and you will, indeed, get an eye full.

Hey, when you have seen one of them you have seen all of them. Nothing shocks me after three marriages and a few boyfriends in my past. Well, husband number 3 is a keeper, if looking a bit like he was rode hard (probably by wife number 1). Dianne

Hi Marcia, stop by my blog and pick up your reward!

I'd love to be a bystander, but I have trouble riding a bike fully clothed. A fall would be embarrassing.

Not something I could contemplate, too many wobbly bits! And I worry about alcohol consumption and bike riding. Always good to join in with others for fund-raising though. I take it you are not signing up then.

Ladies and Gentlemen, to all of you who expressed your gymnophobia, just calm down and take a breath. Find peace with your body, and if you must, turn away from the sight of mine but don't criticize others for lacking shame. There is a difference between immodesty, flaunting it, and simply having body pride.

Some corrections/facts about naked bike riding:

We all have parts that will jiggle and please mind your P's and Q's. Respect your fellow naked cyclist, and help keep the rude paparazzi at bay.

Yes, some folks (<10% and women>men) like to put a terry towel on their bike seat for comfort, but terry-free isn't uncomfortable.

Portland's WNBR does *NOT* have "lots of alcohol" involved, but the celebrations/parties afterwards certainly do.

Yes, naked cyclists were welcomed at some bars/afterparties. It's not illegal to have naked patrons into your licensed establishment in Portland, Oregon. No wood, no problem. Dancing naked with dozens of friends is really fun!