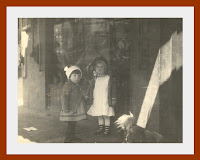 I haven't written much about my mother for this blog because there’s so much to tell and it will take a while to do her story justice. But, in honor of the 50th posting from dabbler me, I’ve decided to get started with it, especially since I can imagine her looking over my shoulder and admonishing me with “What are you afraid of? Just get started. It can’t be that hard.”
I do want to begin by saying my mother was, by far, the most important influence in my life. Most of the good habits I have are from her, as are the majority of the bad ones. Mama wasn’t perfect and wasn’t the least bit interested in being perfect. I can just hear her say how boring perfection would be.

My mother smoked and drank and had a very exciting life until she gave it all up (all except the smoking and drinking part) to marry my daddy and to birth and care for, and about, my brother and me. She was a good wife and a good mother, while also managing to stay true to herself for her entire life. She was a painter and a sewer and a crabber and a knitter and a fisherwoman and an organist (not a very good one) and a furniture refinisher and an upholsterer and a shrimp net tie-er and a crochet-er and a jewelry maker. She was also a physical therapist and One Tough Cookie.

I have, however, documented my mother's life in other ways. A story I wrote for Arizona Highways was about Mama's childhood summers spent in what is now the Sedona area of Arizona.

And after my mother’s death, I did name a character after her in my last book, Westward Ho, a decision that truly horrified some of my friends. Their trepidation most likely came from the fact that the so-named character was a prostitute. In fact, Mama's namesake was the Ho in Westward Ho. This characterization wasn’t based on my mother’s history (as exciting as it was) but on the fact that her nickname, Chickie Ling, had always sounded like an Asian call girl to me. Although Mama wasn’t Asian and she was never (as far as I know) a call girl, I believe she would have loved being made a prostitute in her daughter’s book. In fact, I know this for certain.

In addition, my crazy idea of naming a character after my mother was based on my desire to use her home town of Jerome, Arizona as the prototype for the town where the fictional Chickie Ling had, at one time, plied her charms. I called my made-up town the silly name of Fred, Arizona, but the descriptions were based on my memories of current-day Jerome.

Here are a few:

The town of Fred looked, to Annabelle, like Arizona’s answer to Lost Horizon, with the illusion of being caught up and then left behind in an early daguerreotype print.

For better or worse, Fred du jour still brought to mind rowdy bars and musty-smelling whores. Annabelle half expected to see a drunken scalawag being dragged out feet first from one of the still-solvent watering holes. However, instead of tethered horses from an earlier time, new and expensive Harleys were resplendent, parked and chained in a shiny row on Main Street.

‘Next street down’ described it perfectly, as blocks were connected by steps instead of sidewalks. You could get a nosebleed just going to the drugstore (not that there was a drugstore in Fred).

Annabelle and J.B. each decided to order a glass of wine so that they could watch the sun set from the deck of The Haunted Hamburger. There was certainly something magical about the view, the striations of vibrant sun-streaked sky hues meeting in some kind of strange juxtaposition with the dun-colored earth, kind of like tutti-frutti topping off caramel crunch.

The above fictional descriptions are really, truly what Jerome, Arizona looks like now, at least to me. It’s on the side of a mountain and was, at one point, a ghost town. Now a funky artists’ colony, it does indeed, have a restaurant called The Haunted Hamburger and another called Belgian Jenny's Bordello, so named after the houses of ill repute that flourished during its mining heyday. The town of Jerome, when my mother was a child, was a bustling place with a productive copper mine and schools and businesses, but it was still enough of a departure from my childhood in Savannah, Georgia to seem different and romantic to me. I think I now see writing a book with my mother as a fictional character was just a way to put myself in the midst of a town that holds a special place in my heart.

And so, I will go from here to tell my mother's tale, whenever my memories, or Mama herself, nudge me. I won't try to tell it all at once, but in small stories, stories that made up the life of a remarkable woman, a woman who was thoughtful enough to detour her journey and change her dreams in order to have me and guide me and love me - a woman who still lives with me every day of my own life.
at September 05, 2010

I can hardly wait, Marcia, to meet your mother. I too am writing a chap book about mine for the family and occasionally write about her in my blog.
Your novel sounds fascinating, where can I get a copy?
XO
WWW

I'm love'n this story. My mother-in-love was a great mentor in my early days and I've written about her in my blog. Still miss her!

Like Brighid above, I'm love'n this story, too. Your mother must've been one cool character. When I read your story's title, I immediately studied the photo of the little girls to see if the one on the right might be Asian!

yes please.
I think it's wonderful that so many of our mothers and fathers and other family members are having their lives looked at and recorded by bloggers. It helps the writer to understand their past and make sense of the present and it gives long gone people a voice.

Beautiful. I especially loved the 2nd paragraph. I'm anxiously awaiting more stories about your Mama. She sounds like a very interesting person. Mary B

Nice memories -- and nice incorporations of them into your writing. Thanks for visiting my blog.

Excited to hear more about Chickie Ling; glad you're getting started! You are lucky to be able to write about your mama in such a positive light - what a tribute. You really are such a gifted writer - so darn fun to read - thanks!

This is the first I heard of your having written a book though it doesn't surprise me with your obvious talent for story telling! I can't wait to hear more about your Mom. I found a copy of "Westward Ho" and another you have written, "Flat Busted" on inter-library loan. I look forward to reading them. Sharing stories of your Mom is such a gift to your entire family!

Cile, I believe you are the first to ever request one of my books on inter-library loan. This is, indeed, a proud moment for me.

Marcia, I wish I had gotten a chance to meet your mom. I'm sure she would have loved your stories and being a featured character of questionable repute. Your children and grandchildren will love having these memories of you and your family.