Looking for Myself in Family Pictures

These days, births are video-taped as babies slide into the world and paparazzi sell photos of dead celebrities to skanky magazines, both of which are helping to offer true cradle-to-grave viability documentation. In addition, every nuance of daily life is archived via digital camera, cell phone, and Skype, not to mention blog entries posted with Grammy contemplating the state of her brassiere. Before all of this new technology, not to mention intrusion, people had photos taken only on special occasions or by some astral alignment of stupendous serendipity, i.e., someone with one of those newfangled cameras happening upon someone else sitting stalwartly astride a horse or vamping roguishly in a Model T.

I'm pretty lucky in the pictures-of-antecedents department. I have quite a few photos of my grandparents and several of great grandparents. I knew my maternal grandparents, who lived good long lives, mostly in northern Arizona. My father's folks in Waycross, Georgia, weren't so lucky, as my daddy's mother died in 1920 during the influenza epidemic that ravaged much of the world, leaving behind four young children and their devastated father, who passed away, himself, in his early 60's during World War II.

I identify with these people who lived their lives the best they could, one day at a time, just as I'm living mine. And those lives all ended, just as mine will. In addition, since I'm related to these people by blood and whatever lurks in my genetic code, it makes sense that we might share some traits, and I'm wondering if I can find some instruction and comfort from what I can see in images captured on film so long ago.

And so, I go looking for myself in photographs taken before I was ever born.

This is a picture of my father's mother, the one who died young. I can now see why I've never been able to wear a hat successfully.

These are my mother's mother's parents, good German stock from Milwaukee, Wisconsin. They had a son who became a concert violinist. While I have absolutely no musical talent, I can identify with the carelessness of their other son who lost a leg while venturing too close to a train track. I'm pretty sure he just wasn't paying attention when that old whistle started blowing.

This is not a picture of one of my relatives; however, trains appear to have been central to family lore on both sides, which is probably true for most families. While my mother's side had my poor unobservant legless great uncle, my daddy's side had the often tipsy Great Uncle Christopher Columbus Beauregard McGee who rode in and out of Waycross several times a year on the back of a train. Although I feel no real affinity for trains, my lawyer brother seems to have handled several large cases having to do with the railroad industry. Not to be outdone, I have been known to become tipsy from time to time. Oh, and I forgot, my mother's mother was sent to live with her aunt in San Francisco after chasing a train that was carrying her true love away off yonder somewhere. I think she was 15 at the time. I can absolutely identify with kind of truly stupid behavior.

Speaking of tipsy and stupid behavior, that's my paternal grandfather on the left;

and my paternal grandfather's father-in-law somewhere in this picture.

And here is yet another picture of my great grandfather on my father's side. I can't even begin to explain this photo but am proud to say that the idiot with the bottle on his head comes from an entirely different gene pool. My relative is on the right, a bit portly to be sure, but not serving as a human bar table. 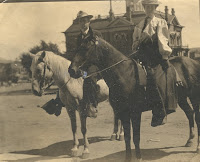 Back to my mother's side of the family. This is a photo of my mother's father's parents. My daddy always said he "married up," and, from the photos I've found and the stories I've heard, this seems to be true. The man in the picture was a lawyer and a judge who was commemorated as being important to early Arizona statehood. My brother followed in the footsteps of my mother's side of the family by becoming an attorney. I, on the other hand, once rode a horse and have been known to cut the tops off of people's heads when taking a picture.

I love these two pictures of my grandfather in Waycross. They appear to have been taken at about the same place and show that progress happened even in small and isolated towns like Waycross, Georgia. Although he owned a livery stable at the time, he still seemed to be very much interested in the new conveniences. When I think about how it feels to adapt to change and to shifts in the economy, I need to remember what it must have been like to invest in horses during the advent of the automobile. I do wonder why the steering wheel was on the right. 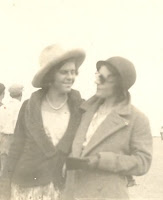 This is a photograph of my mother with her mother. In this picture, my mother looks very much like my niece, Regan. Although I would like to say I take after my mother's side of the family, I believe my brother inherited most of those genes. I think I'm mostly Waycross, not so much northern Arizona. 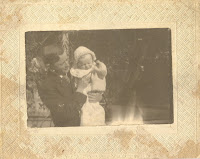 But, on seeing this picture of my Waycross grandfather holding my Waycross father just a few years before he would be left with motherless chlldren to raise, and then reading this from the Waycross Journal Herald after my he died:.
George W. Mayo
Death Mourned
City Official Had Long Record of Devoted Service
George W. Mayo, 62, died at a local hospital last night following a heart attack. Mr. Mayo was one of the most popular and best-liked men in Waycross. For the past twenty years or more he has been connected with the city as superintendent of the Sanitation Department. On numerous occasions banquets in his honor have been held by the city employees as a tribute to his efficiency and to the esteem in which he was held by all who knew him.
I felt quite proud. To be popular and well-liked while in charge of city sanitation couldn't have been easy thing, and my grandfather's dedication and success serve as a substantial legacy. 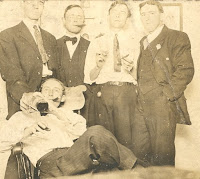 And, apparently, he was quite the party animal, a trait all three of my children have inherited.

All of your pictures of your family are just GREAT, Marcia. I think maybe you come from a very spirited and engaging gene pool and it is reflected in your writing. Your statement, "... My brother followed in the footsteps of my mother's side of the family by becoming an attorney. I, on the other hand, once rode a horse and have been known to cut the tops off of people's heads when taking a picture..." made me snort-laugh! Hysterical! You always find a way to jump ahead of a thought and spin it into gold for the reader!

Delightful! I love the way you wove the photos, stories and history all into one beautiful story. Christopher Columbus Beauregard McGee?? I bet he was an interesting fellow. I remember when my mother always wore a hat when she went out. I was always pleased it was out of style during my time. Loved it Marcia. Mary B

Cile, thank you so much. You are such a good friend. Mary, as far as we know, Christopher Columbus Beauregard McGee might be related to you too!

You are so fortunate to have so many old family photos. I have only a few. Isn't the photo of your mother's mother's parents wonderful? I love that one best of all.

Quite the treasure trove, the fellows enjoying the fresh air by tent looks to have an interesting story behind it. I wonder what your Mom was saying to her Mom. Lovely to have so many family pictures.

WWW, I am so sorry. This seems to happen way too often. I know it's frustrating for the commenter. Even more so for me as I love reading what you have to say.

This was just a great, satisfying read. i loved the geneology with a lighter twist.

Great post, delivered with your usual panache and laced with a thoroughly irreverent dose of humour. Aren't families interesting animals?

Glad to hear you have German antecedents coming from 'good stock', that must be the reason for your efficient exploration of the family history.

Do I take it that sanitation plays little part in your life? (apart from the domestic kind, natch.)