Why It's so Difficult to Talk to a Man 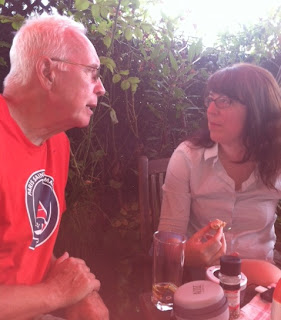 Joe talking to his daughter, Meghan.  You can tell by the look on her face that it's something boring.


When I moved to Midtown Atlanta and began teaching elementary school again eight years ago, the only people I talked to were women and kids.  Women and kids are easy to talk to because they are logical and make sense. Men, on the other hand, aren't and don't.


About six months ago, Joe re-entered my life - an old friend who became my new love.  The very good and very bad news is that Joe is a man.

I now remember why it's so difficult to talk to a man.  Here are just some of the reasons:

Joe can recall the names of every athlete, author, musician, actor, poet, composer, or protagonist he's ever watched, listened to, or read about in his entire life, but he can’t remember the names of any of my friends.

Me:  “I’m going to call Bonnie.”
Joe:  “Who?”
Me:  “You know Bonnie, the one we visited whose husband is the banker.  They have the baby named Jasmine.”

So it’s hard to carry on a conversation when I'm always having to regurgitate everyone’s biography every time I start talking.


Joe doesn’t know how to gossip.  He just doesn’t get the point of it.  This is made more difficult since he can’t remember anyone’s name and I have to provide the back story before I start in on the juicy stuff.

Joe only speaks in sports or old movie or Bob Dylan analogies, which are stupid. And when I ask him a sports question just to pretend I’m interested, he goes on too long, with too many facts, too much analysis, and, before I know it, the commercial break for House Hunters International is over and I’ve missed out on which house the cute couple chose.

4.  Men's sense of humor is different (and less evolved) than that of women.

Joe only knows one joke, the string joke, which is not funny.  In spite of that, he doesn’t get my jokes, which are funny, although they are often dirty.

5.  Men are not good commiseraters.

When I want to complain about something or someone, Joe provides a solution.  A woman would never do that.  She would just agree with me about what an ass that person who wronged me is.  Joe doesn’t understand that I don’t want to solve the problem, I just want to bitch about it in a friendly and agreeable milieu.  I want to be validated, not fixed.

6.  Men are literal and without nuanced layers.

The other evening, Joe and I went out to his back patio for an after-dinner drink when he noticed that something had torn the upholstery on his patio chairs.  After some brainstorming about what it could have been - a squirrel, a snake, a cat, a dog, a mountain lion (in Coastal Georgia), or an angry neighbor, Joe finally conceded that it just might have been a raccoon since they are known to frequent his neighborhood.

At that point, Joe said, "I wonder if Robert would let me use one of his traps," to which I said, "Now, remind me of who Robert is", hoping that he'd fill me in on some kind of interesting information (if not gossip) about Robert.

But alas, Joe's reply was

And so, there, in one big ole man-sized nutshell,  is why it's so difficult to talk to a man, or least to Joe.*

*If you have any commiseration to offer, let me know. Otherwise, keep all solutions to yourself.
at August 30, 2013

I am laughing out loud! Love the part about going on too long. I don''t even watch TV anymore when my husband is around because he will start talking about the news/work/yard work/anything boring and I have to sit there and pretend I care.

OMG ROFLMAO... Yep, all true. Bless You, You hit a homer with this one!

We have a cousin named Portia?

Boy, do I commiserate. Every time I ask Ken a simple question requiring little more than a yes or no answer, he manages to take himself on a trip down memory lane. He dredges up the history of, say, a Phillips screwdriver, when all I wanted to know is where the friggin' Phillips screwdriver is hiding. I try to ask quick little questions during commercial breaks, and he's wrapping up his answer just as the second half of the show ends. To add insult to injury, Ken has an amazing memory of childhood friends and adventures. I barely remember ever having been a child.

We don't have men for their conversation.

Too cute, including the comments.

Spanning more than fifty years, our conversations mostly have memories in the gaps. I can tell my same stories over and over because he doesn't remember them; he's easily directed toward tomorrow's plans.

I laughed all the way through this. I wonder if Joe is my husband Art's long-lost brother.

BRILLIANT POST. Absolutely true - every word of it. ARe all men related to each other??

I was with a bunch of men last week and decided to just sit and listen and be inobtrusive, they forgot about me and launched into this bizarro conversation about boats and hunting and it was all about specifics like motors, what torque and oiling guns, what oil, and dogs, what hunting ones are best.

There wasn't one whit of emotion in it and these were all best buddies.

And I always thought they talked about women when we weren't around.

That was so funny! You really have a talent to write funny lines – but then, as much as they are funny, they are also so true!