How Raphael Saved Père-Lachaise for Joe and Me 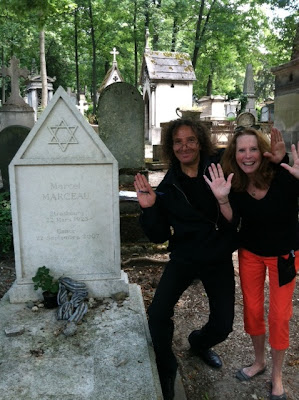 Everyone had told us how great Père-Lachaise, the historic cemetery in Paris, was and that we should visit, as everybody who was anybody is buried there.  Jim Morrison, Frederic Chopin, Oscar Wilde, Edith Piaf, Yves Montand, Sarah Burnhardt, and both Gertrude Stein and Alice B. Toklas are just some of the more famous dead people living there.

Joe and I had been in Paris for just a few days and were still figuring out the metro system, but it seemed that the cemetery was an easy enough walk so that’s what we did.  We arrived in the midst of a dappling morning that would soon give way to a warm day.  As is typical of us, we entered through the closest, albeit perhaps not best, entrance and just started wandering around.

Oh my God!!  There are a lot of people buried in Père-Lachaise!  Some in grand tombs, others under slabs, all packed in tighter than the rush-hour metro traffic we were still getting used to.  We found a couple of famous graves, but overall, we just stumbled around, growing hotter and hotter and more exasperated.  The other back-door meanderers seemed just as lost as we were.  Joe would ask them in French if they knew where the heck we (and they) were, but their answers were typically a sad “Non.”

At some point, we decided to give up for the day and do some research and come back.  We were hot and our feet hurt.

But just as we tried to figure out how to exit the labyrinth that was Père-Lachaise, out of a small grove of trees appeared what seemed to me to be a wood nymph of some kind.  It was wearing a black shirt and trousers with dark curls encircling its head.  I had thought our wood nymph was female until I noticed the male pattern bald spot peeking out of her curls.  He introduced himself as Raphael  and then said, rather than asked, in quite good English, that we were looking for Jim Morrison, which, of course, obviously being Americans, we were.  I thought it was so sweet of this petite Parisian to take time out of his day to show us that iconic American tourist destination.

Before we knew it, we were following Raphael all over Père-Lachaise.  Boy, was that rascal fast!  At some point, Joe and I whispered to each other that we were going to have to pay this guy, but we tacitly agreed, whatever it was, it would most likely be worth it.  Not only did Raphael know his way around, he knew the shortcuts and he knew stories about the most famous of inhabitants.  He knew who died of what (often something messy or scandalous), he knew how many dead-people layers were allowed and who would have to be dug up after 99 years so others could be buried, and who was famous enough to stay forever.  He was bossy and sometimes just on the edge of boorish, but he was always interesting and entertaining. He told us that he wanted to be cremated when he died, or "barbecued" as he put it, and said that those who were dug up for others to be buried were typically "barbecued" at the end.

One of the most interesting of Père-Lachaise stories was that of Victor Noir, a journalist killed by Pierre Napoleon Bonaparte in a dispute over a duel.  It wasn't his death so much as his tomb, which is notable for the realistic portrayal of the dead Noir, that makes him, according to Raphael, the most visited of all Père-Lachaise dead people.  And the photo that Raphael bullied us into posing for and which embarrasses Joe just a tad, became my absolute favorite of our whole Paris trip.  I'll leave finding out the entire story of why Victor Noir is such a hit with cemetery visitors up to your own investigative resources (as in, how fast can you google Victor Noir?) but I can tell you that my right hand in the picture is placed (under Raphael's assertive instruction) just where you think it is. 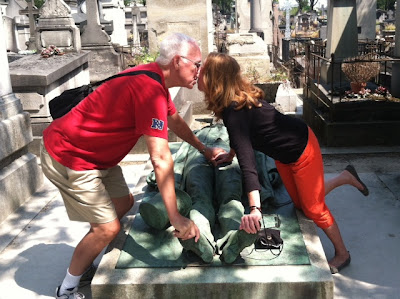 Apologies to Joe Guiendon for including this great picture!
Finally, after lots of stories, a few yarns, and, most likely some outright lies, Raphael was spent and so were we.  Joe shook Raphael's hand and thanked him, asking how much we owed him.  Raphael responded with something about how our enjoyment was all that mattered to him. But when Joe pulled a twenty out of his pocket, that scamp, Raphael, intoned with "More."  When we laughed at his cute retort, Raphael responded again, this time with, "No, really.  More."  At that point, I pulled my own twenty out of my purse, which led to a couple of "Mercis", several "Adeux", and quite a few cheek kisses.

Joe and I agree that meeting Raphael and his "friends" at Père-Lachaise was well worth the forty euros we were coerced into spending, especially since our intrepid huckster guide also showed us how to exit the cemetery.  Otherwise, we might still be wandering around in there somewhere.
at August 12, 2013

Fascinating, I did google poor departed Pierre. Quite a story, his and yours. Thanks for sharing it.

What a delightful visit and intrepid character you found along the way.

What a guy! And I can see why the second photo is your favorite. I enjoyed this story.

I love cemeteries and yes, they are very, very hard to navigate without an idea where you are going. Did you check the cemetery office first? They often have very detailed maps.
Love the pictures! The 40 was worth it.

Second photo implies les necrophiles a la menage a trois! Where is Rimbaud to referee?

So good to see you & Joe on the road to happiness.
Old cemeteries are interesting places, I find the ones here, out west, especially so.

Oh, I am just catching up. The kissing pic makes me happy for you, even tho' it breaks my heart a bit for me.

Oh my goodness. We have just been to Paris. Our last morning we went to the cemetery. I don't mind telling you the weather was not good - we'd found Jim Morrison's grave and headed off in search of Oscar Wild. Frankly we were both about ready to say let's just leave - because it frankly is a huge place - when we heard a voice shouting 'Oscar Wild' followed by a rather sprightly fellow jumping through the trees beneath an umbrella! In fact the very same person you pictured here - all dressed in black with a coat and umbrella of course. He made our day he really did. He promptly took my arm and we were off on his whirling dervish tour. Amazing.
I loved finding your piece - so very similar to our own experience.
Lynn :D

Oh my goodness. We have just been to Paris. Our last morning we went to the cemetery. I don't mind telling you the weather was not good - we'd found Jim Morrison's grave and headed off in search of Oscar Wild. Frankly we were both about ready to say let's just leave - because it frankly is a huge place - when we heard a voice shouting 'Oscar Wild' followed by a rather sprightly fellow jumping through the trees beneath an umbrella! In fact the very same person you pictured here - all dressed in black with a coat and umbrella of course. He made our day he really did. He promptly took my arm and we were off on his whirling dervish tour. Amazing.
I loved finding your piece - so very similar to our own experience.
Lynn :D

Thanks Lynn! Your comment brought back memories for me too!

Oh my goodness, we just returned from Paris and also met Raphaelin Pete Lachaise. He made the morning!!!well worth any euros you leave him with.

Stumbled across your blog because I too just had the Raphael tour at Pere Lachaise! I figured I’d google his name because someone has to have had the same experience. He’s still there 6 years on, and we have the same embarrassing photo as you! Ha! I drug my husband to the cemetery but once we met Raphael and he gave us the tour, my husband said he was so glad he went and that our little tour guide was well worth the $60 (we chose this amount, not Raphael). I’m going to tell anyone I know going to Paris to make the trip and look out for our spritely friend.