It just felt right.  I was in Cabbagetown and out of toilet paper. 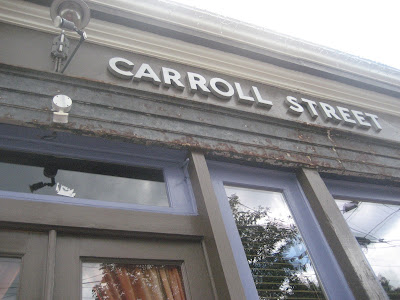 When I first moved to Atlanta seven years ago, someone took those of us who toiled together out to lunch at a funky little restaurant called the Carroll Street Café.  That someone, who was a native, said the restaurant was in Cabbagetown, a former working-class neighborhood that got its name from – well, I bet you can guess.  The restaurant was cute and crowded during the lunch hour and it was difficult to find a place to park.  The area looked like it was in the midst of some gentrification but it still appeared very different from midtown where I’d just moved.

That was the last I thought about Cabbagetown until I discovered Whittier Mill, a former mill town up by the Chattahoochee River, while I was writing my children’s  book about Georgia history.  I was telling a friend about Whittier Mill, saying I hadn’t realized there had been mill towns so close to Atlanta, when she responded with “How about Cabbagetown?”  Duh.  The things I don’t know continue to amaze me.

For some reason probably having to do with being born a Democrat, I’ve been attracted to mill towns since I was a child, riding in the backseat of the family car as we traveled by the collections of houses all looking the same, houses situated in close proximity to each other like a large toothy grin.  I was used to farms, cities, and suburbs and these small communities looked so different and appealing in some way.

So, recently, with my newly-acquired retirement time, time that allows me to visit the Carroll Street Café between the hours of lunch and happy, I decided to give Cabbagetown another look.

But first, I revved up my trusty computer and did some research and found the following from Profiling Solutions:

In the Battle of Atlanta, The Atlanta Rolling Mill was a primary target of Sherman, as it was one of the South’s largest producers of rail track, cannons and two inch sheets of steel. Destroyed during the Battle of Atlanta by the retreating of the Confederate army, the mill site was acquired by Jacob Elsas and Isaac May, German Jewish immigrants who came to Atlanta during reconstruction. Starting out as rag, paper and hide dealers, they transformed their business into a container business focusing on cloth and paper and incorporated the Fulton Cotton Spinning Company in 1881.

The International Cotton Exposition of 1881 was held in Atlanta in an effort to attract investment to the region. With many industries relocating to the post-Reconstruction South in search of cheap labor, the partners acquired the site and built their factory. Expansion of the complex occurred over the years with addition of a bag mill, but a dissolution of the partnership and change in business direction lead to the incorporation of the Fulton Bag and Cotton Mill with Jacob Elsas and his family having control of the site in 1889.

Cabbagetown was built as the surrounding mill town. Elsas built a small community of one and two-story shotgun houses and cottage-style houses surrounding the mill. Like most mill towns, the streets are extremely narrow with short blocks and lots of intersections. At its height, the mill employed 2,600 people which consisted mostly of poor whites recruited from the Appalachian region of north Georgia. A protracted strike in 1914-15 failed to unionize the factories workforce. For over half a century, Cabbagetown remained home to a tight-knit, homogeneous and semi-isolated community of people whose lives were anchored by the mill, until it closed in 1977. Afterwards, the neighborhood went into a steep decline which didn’t end until Atlanta’s intown renaissance of the mid-1990s. The mill itself was named to the National Register of Historic Places in 1976.

What I found when I went were cottages that appeared to be inhabited by people who didn’t seem to mind being a bit different, some were pristine, others barely hanging on. 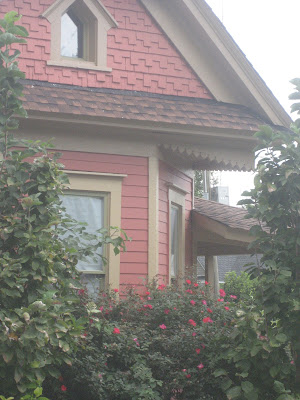 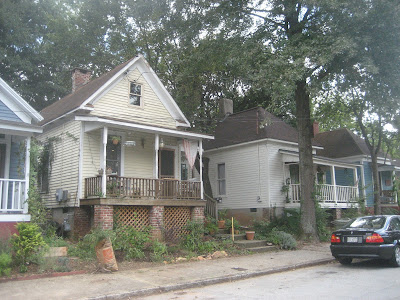 There was some yard art, including a shrub pruned to look like pacman and a large sign on a front porch proclaiming, “You are here.”  And my favorite sight was someone manning a skateboard with a twelve-pack of Pabst under his arm. 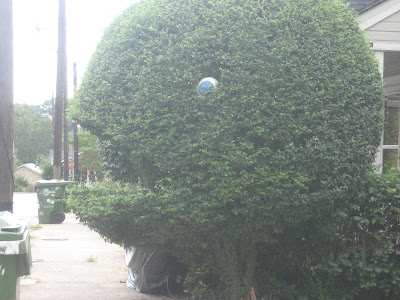 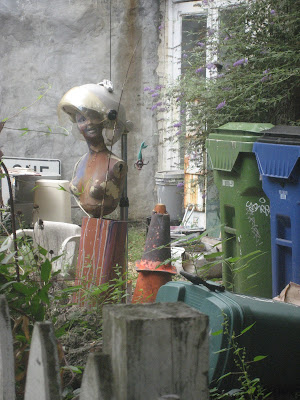 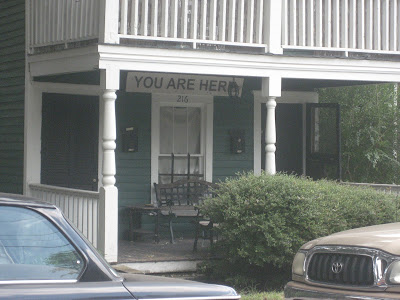 I stopped by the Carroll Street Café for a Diet Coke, which I enjoyed out front on a gorgeous and not terribly hot September afternoon, looking up at the Fulton Bag and Cotton Mill smokestacks that were looking back down on me, as were the inhabitants of Oakland Cemetery,  I was thinking about the people who've walked Carroll Street throughout Atlanta's history. The Fulton Mill is now the nation’s largest residential loft community but the cemetery still only houses dead people, some of whom were famous. 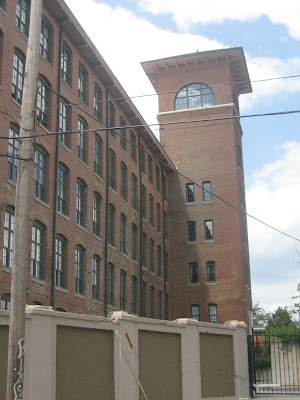 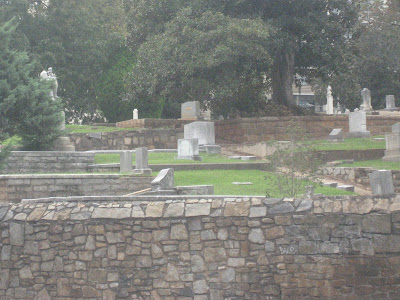 While I enjoyed the Carroll Street Café and the sun warming my face, I fell a Little in love with Little’s Food Store, just down the street.  Not only do they sell fruits and vegetables and hamburgers and beer and wine, they also have toilet paper. 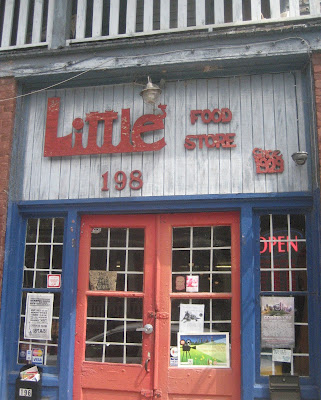 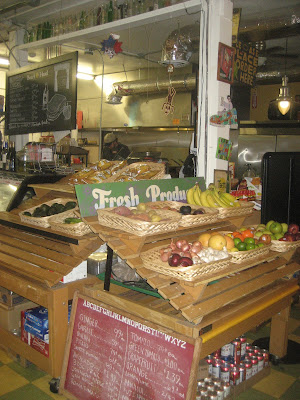 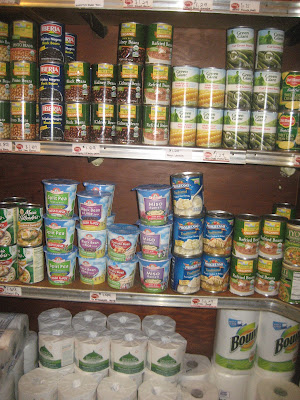 For more information about Cabbagetown and its history, see

Fascinating Marcia, these little places hold a lot of stories.

I find it amazing what you find around you, Marcia, and how interesting you can make history!

How did I miss that you now have retirenent time. Was retirement or the history book the next shiny thing? Okay, so I'm nosy.

I was so happy joining you on the exploration of past and present of those 2 Atlanta area mill towns. But I have been thinking about you and missing your sense of humor and history. Although vicariously enjoying the skateboard-Pabst combo, I want more.

The reality is, however, that retirement time should be your time to do exactly what YOU want to do if at all possible. Just know you have a fan lurking, but absolutely not stalking.

LC, I did decide to retire at the last minute. I had some eye problems in the spring that necessitated surgery, nothing like your experience but enough to make me wonder if I was doing enough of what I want with what time I have left. Thanks so much for your kind words (Celia and Cile, you too!). I'm still finding my way.
Marcia

Oh, my. I have missed you! I did not know that you were in retirement mode. I hope that you can enjoy every minute of it. My step-daughter and her husband are looking int a return to Atlanta as their kids go off to their own lives.

What a wonderful piece on mills. Wonderful that you tried to dream-walk the sidewalks with past residents, the funky house decors were screaming creativity. Such places should not be gentrified. Nice post -- barbara

What a delightful visit! Glad you're writing here again. Some things never change -- "...the cemetery still houses only dead people..." Why did I chuckle when I read that?

This is wonderful, you are back!

I hope you will entertain me - all of us - more often with interesting tales like this one. I like the idea of 'shot gun' houses. Care to explain?

Happy retirement! You know, you'll find you suddenly have so much to do that you'll begin to wonder how you managed to fit in work of the paid variety as well.

Friko, shotgun houses were houses built on such narrow lots that they were only one room wide, with other rooms built behind them. The term shotgun came when someone declared that if he shot through the front door, the bullet would go through all the rooms and out the backdoor.