Looking for Junanto: Shipping Out

If you saw my earlier introduction,* you know that my mother had decided to join the Army and was headed to Texas, not Michigan or Washington, for her physical therapy training.  I believe it was some time in the  summer of 1942.  As you read this, you'll notice a common theme to my mother's experiences during that time, the summer she turned 25, and that theme was "men."
She was young, pretty, unencumbered, and looking for adventure. 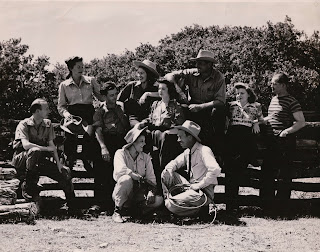 Part of my mother's Army training, apparently.
Mama is in the front with the cowboy
So you went to Texas. Was that San Antonio?
Yes, Fort Sam Houston
And how long were you there?
A little over a year.
Was the training hard?
It was interesting.
What was life like there? Did you have fun?
Fun.
Were there a lot of soldiers?
Yeah. Of course, we weren't supposed to date anybody but officers. But we did.
Were you commissioned immediately?
No, we had to complete the program. We finished in late August and the next day, we signed up for the army and got our commissions.
Where did you live during your training?
On the base. They were wooden barracks. We left within a couple of weeks of our completion of the course. We sat around in San Francisco for a couple of weeks, getting clothing. They gave us cold weather clothing and told us we were going to Alaska.
And so, my mother thought her grand adventure would be in Alaska.  I have no idea why Army troops were being sent to Alaska, but, no matter, because Alaska is not where she ended up.

When we finally left and got on our ship with our stuff, we were the first ship that ever went over without an accompanying gunboat. We went down past the tip of South America and then turned west and came up at the bottom of New Zealand and then up the Australian coast.
When did you know you were going to Australia?
When we got there.
You really didn't know where you were?
No.
Didn't that drive you crazy?
No. I was a lark! Everyday something different, and somebody different.
So, how many women were on this ship and how many men?
Probably about 100 women and 1000 men.
You were probably sorry when you got there!
By then, I was dating the merchant marine man that was head of, let's see what his job was on the ship. Head of all the mechanics.
How did you date on the ship?
Just like any place else. There was one place where we got together every night. The fellow that I ended up dating could really play the piano and we sang with the piano.
Could you drink?
If you had it, you could.
Did you stop in a port ever?
No, not until we hit Brisbane.
How did you take on fuel?
I guess we carried enough. I can't remember how many people it was supposed to carry.
I remember that you had 4 times as many people as you were supposed to. Did you all just have a tiny little space?
We had cabins, 3 tier bunks, 3 of them, 9 girls to a room. And you couldn't get down and get dressed except one at a time, so you sat on your bunk and you pulled on your under clothes and then you took your turn to come down. We did have a bathroom, a pretty good size one. But it had salt water in it, no fresh water.
Where did you store your stuff?
In the hold of the ship. We were allowed to keep a musette bag, that you hung over your shoulders, but your bedrolls and your foot lockers were in the hold.
Food.
Two meals a day. And I was one of the few women that ever went to eat. The rest of them were so seasick. I've never been seasick.
The food was ok.
Yep. It was good. It was hearty.
You all didn't have any work to do on that ship. Wasn't there anything they wanted you to do?
No, 23 days. It was getting kind of boring toward the end. We played cards.
The men, did they have stuff to do or were they just being transported?
They made up stuff for them to do. They assigned them things to check on this, check on that. But see, we didn't have anybody to lead us. We could do whatever we pleased. We had dietitians, physical therapists, and nurses.
Did you just have physical therapists rooming with you?
We had some dietitians and maybe a couple of nurses.
So, you got off in Brisbane?
Yes
I bet you were excited.
We wanted to see what was next. And we arrived Christmas Eve day.
Note:  I looked up Alaska during WWII and found these resources from Amazon:
Thousand-Mile War: World War II in Alaska and the Aleutians (Classic Reprint Series)

Seasick and not eating for 23 days? Now there's a diet that can loose you kilos and kilos.

I bet your mum had the time of her life on board ship, talk about choice.

I always knew I was born to late. I hope you have read the book Tales of the South Pacific. Sounds like your Mom crossed paths with Nelly Forebush (sp?) My Aunt Marge was probably in your Mom's outfit. I used to love to listen to Marge's tales. Dianne

Your mom was certainly an interesting and adventurous lady! How wonderful that you have a taped interview.

What an adventure! I barely knew Australia even existed when I was in my early twenties, but your mother experienced it first-hand. The trip there must have been difficult, though, even with a new beau!

Wow, that is a neat peak into an unknown world to me. What an adverturous woman she was. I really would have loved those M/F odds.
My dad was in Alaska during WWII building airstrips.

Love family stories of their lives. I've taped some of my dad's, and it's interesting to think of him as a young flyer. Wish my mom would tell me about her life...but she doesn't want to for some reason.

Brighid, I've just realized what a gift my mother gave to her family when she agreed to let me interview her. I still have two aunts, one of whom doesn't remember much of anything any more, the other one just gets all nervous and upset when I ask her about her childhood.

Oh how I love hearing the interviews of the stories of your Mother's life, Marcia! Thank you SO much for sharing them...all the history and the personal perspective is fabulous! I love how she is so innocent of the drama as she relates these memories. One can allow their imaginations to flow in the reading.

Keep them coming. When I knew your mother, I never thought of her as an adventurous woman..

Dianne, when my mother was in her 80's, she flew over Antarctica in some kind of small plane. She never lost her spirit of adventure. The bad news is that I inherited very little of it.

Your mom is way cool. I look forward to hearing more about her life!

Tremendous memories to have or your mother; it's amazing what tales come out of wartime - no time to sit around feeling sorry for oneself and lots to do, real adventures for the young. I hope they are all happy memories for her, without the sorrow of death and parting.

Interviewing our loved ones is a great way to preserve the history of our families. Thanks for sharing! Well done!

I think our blogs serve a historical purpose now. How amazing your mother was, Marcia, though she would not have thought so at all!
There is certainly a book in her.
One of my aunts served a similar purpose to me and was so open and honest. My father was very tight-mouthed. He really believed in closing (psychic) doors.
XO
WWW