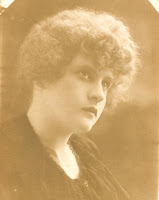 Some time around the turn of the century (that last century, not this past century), Flora Selma Teresa Hartwig stood somewhere in San Francisco Harbor, champagne bottle in hand, and christened a ship. Her parents had nicknamed her Flossie, her husband called her Florence, my mama called her Mother, I called her Mammo, and my children called her G.G.

Mammo was my grandmother and we didn’t get along particularly well. She came to live with us after Dadding died, when I was around 12. She was smart and bossy and we got in each other’s way. She walked with a stoop and kept telling me not to step on the cat. The next year, we added an addition to our house for her to live in – a mother-in-law suite. It was pretty cool and I would have liked to have had it and probably deserved it, being 13 and all. It had a mini kitchen and a nice bathroom and a living room-bedroom combo. It was a lot better than my room and having to share a bathroom with my brother.

From what I can tell, Flossie was a difficult child. She was headstrong and probably too smart to be just a girl in Milwaukee Wisconsin in the late 1800’s. Family lore has it that Flossie was sent to live with her aunt in San Francisco after running down a railroad track after some boy who’d been sent away for some reason probably having to do with Flossie.

I’m pretty sure her parents meant for the deportation to be a punishment, but, according to my mother, life in San Francisco with a young aunt and her well-to-do husband was heaven. Not only did Flossie get to christen a ship, for a while she had access to Uncle Deep Pocket’s bankroll, until, at some point, she went too far and Uncle cried "uncle" and her money was cut off. But, by then, she’d met my grandfather, Perry Ling, who just so happened to be engaged to a minister’s daughter in Los Angeles, where he was finishing Law School at USC.

At that point, Flossie became Florence and Florence found herself living with her husband and mother-in-law in Prescott, Arizona, a place not exactly in the same social stratum as San Francisco. But Florence prevailed and became pregnant with my mother, sipping champagne imported from France during prohibition in order to stave off morning sickness.

My grandfather was offered a job as City Attorney for the mining town of Jerome, Arizona, a place Flossie would have hated and a place you'd think Florence would have abhorred, but, before long, Florence had her card games and her ladies' clubs and her off-handed good works for the brown and yellow and non-English speaking families of the town. And, when she had the time, she mothered my mother, who eventually realized she would be an only child.

Some time after Mama grew up, my grandfather became an Assistant Attorney General for the state of Arizona and he and Florence moved to Phoenix. I remember summers as a young child, staying at Mammo and Dadding's house on West Whitton, especially one summer when Mama and I went by ourselves, riding a bus all the way from South Georgia. That was the summer I learned that grown-ups did other things besides go to work and church. I think of my grandparents as using their home as something akin to an intellectual salon, sort of like a small wild-west-American version of the Left Bank. I remember Saturday nights with friends over for a few drinks, when politics and the ways of the world were argued over and smoke and adult laughter filled the Arizona air. 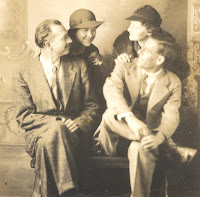 My Grandparents with friends. The Lings are on the right.
Reconciling the image of Flossie with what I remember about Mammo is difficult, but not as difficult as it was before I too moved from girlhood right past womanhood and straight into Grammyhood. Remembering that Mammo was once a Flossie, and then a Florence, helps to remind me that we all grow and change as we age, but our true selves are right there where they always were. I remember that Mammo loved Johnny Carson and she loved politics; she was always up on current events and she was smart as a whip until the day she died. And now I see that Mammo was a feminist before most people realized that options were an option for women, and she somehow knew she didn't have to give every part of herself away to be a wife and mother.

Was she a good wife? Maybe. Was she a good mother? Sometimes. Did she offer something to my mother and then to me that I can share with my daughters and granddaughters? Absolutely.

What she gave me was a part of herself that somehow latched on to a part of me. I think I have her to thank (and blame) for my irascibility, my liberal world view, and my love of a cocktail before dinner.

So, here's to Flossie, Florence, and Mammo. All three made up a truly memorable woman.

And all the part of Flossie and your other kinfolks came together to make a truly remarkable woman in you! And a remarkable writer is added to the other parts. A tender, delightful, insightful and loving story. Thank you. Mary B

It's wonderful that you know so much of your family history, Marcia, and can bring these intriguing people back to life through your writings. I know I would have liked Flossie; not so sure about Florence1

What a great family story. It's sad that more family character histories are not passed on. I love hearing about the past.

What a great gift you have in the memories you share about your family. I love how you are able to look at Florence's many personas and integrate them into one fabulous woman. I'm always amazed at the candid pictures that you have of your family, as well. I can't get enough of those!

You know what? All three of them are a woman after my own heart. Whatever she faced she made the most of it. If you are anything like her, you and I would get along just fine.

Marcia, I've loved reading about the stories of your family. What wonderful pictures. Passing these memories on will be such a keepsake for your family.

Your previous post where you found glimmers of your ancestors in yourself, brother, and children reminds me of the book and song Guardian Angels By Naomi Judd.

Oh I would have loved Flossie, a woman so far ahead of herself, defining herself not in the cloth of her time but spinning herself a sparkly new one.
You write of her beautifully, you are Flossie, Marcia, how good to know you!
XO
WWW

I love your stories Marcia. They are sweet and funny and insightful.

Fascinating story. Really liked Prescott and almost moved there in the 60s. Also when first visited Jerome which was practically a ghost town. A few hippies reportedly rejuvenated it, so some years later when we went there, coming up from Sedona, they seemed to have a thriving tourist economy.