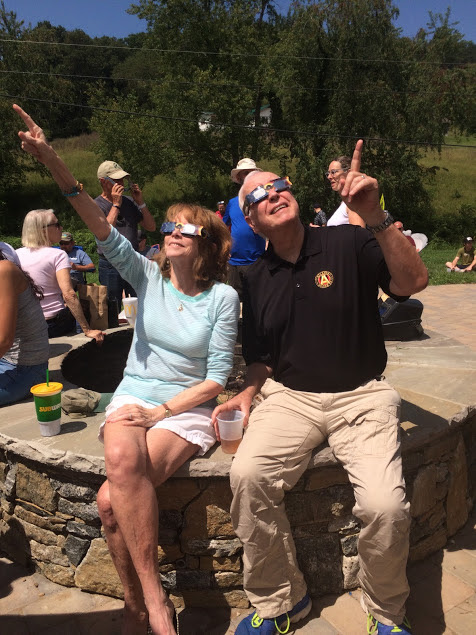 Me Showing Joe the Correct Place to Look at the Eclipse

Joe calls me Bossy Pants, which, by the way, he totally stole from Tina Fey.

I am a bit bossy.  This comes from a combination of two things: 1. I was divorced for twenty-two years, which is a lot of years to be in charge of myself and my surroundings and where I put things (in logical places) and how I do things (the correct way).
2. Joes needs to be bossed.  He has pretty much had a woman in charge of him all his life – his mother, then his wife, Mary, now me.  Even his daughter, Meghan and his granddaughters, Lilly and Elle, offer guidance of the female kind when needed (which is often).  The one time Joe was out from under the hand of a woman was the year he lived in France as a senior in college, the year he pretty much just drank cheap wine, smoked rank cigarettes, hung around in Spain, and didn’t manage to graduate – at least for a while.

And then there is the number of secretaries Joe had during his working years – all of whom were female (and quite bossy).  I have a theory about what’s wrong with our world currently and it has to do computers taking the place of secretaries.  Although Alexa can foresee and even intervene in a manner timely enough to forestall or at least reduce some othe chaos inherent in the male DNA, so far she can’t seem to discern if their flies are open.

Don’t get me wrong.  Joe is a very smart man.  He does well hollering out the answers on Jeopardy, although he often forgets to put the answer in the form of a question, something I point out to him each time.  He beats me at ALL card games, but I’m pretty sure he cheats.  He even wins at Scrabble and I’m supposed to be the WORD PERSON.  In addition, Joe completes the demanding New York Times Sunday crossword puzzle while I struggle with the just shall we say less demanding Monday one.

But, alas, the man can’t manage to remember an appointment or find a band-aid or close a drawer.

Part of the reason I’m (somewhat) bossy is that I am the family mapper-outer when Joe and I take our drives.  Joe does the steering and the gas pedaling about 99.9% percent of the time because my eyeballs and my nerves just aren’t up for the job anymore, especially in Atlanta.  But because we use Google maps and Siri for much of our navigation and because Joe doesn’t listen to Siri any better than he listens to me, I must constantly (and gently I might add) let him know where to go (left right here!),  when to turn (now!), and how fast to drive (*#!* slow down!) When I comment on Joe’s driving, he retorts with “I’m an excellent driver", something he totally stole from Raymond Babbitt.

Joe driving on the Wrong Side of the Road
Ok, since maybe I need to agree with Joe that I just might be a bit of a bossy pants, I'm going to try to mend my ways.  And I'll start as soon as I let him know it's time for him to water the grass and then take out the trash after he closes that drawer in the bathroom, and to remind him to check his fly.

Somebody's gotta do it.

I just discovered you’re back — more or less! I wondered what had happened to you as was enjoying your blog. Now I learn you preferred racing around in a convertible, getting we, going to Paris preferable to spending your time blogging — where are your priorities? As for being bossy — I suppose somebody has to be in charge.