High Tea in a Beer Wagon

About a week ago, I was finally able to meet Ronni Bennett, the Grande Dame of Elder Blogging. We’d tried to get together a couple of times previously, but the stars hadn't aligned correctly. Finally, they came together and it happened.
Ronni lives in Lake Oswego, a tony suburb of Portland, OR, while I spend my summers in a small condo in St. Johns, an indubitably untony village just over the St. Johns Bridge in what is known at NOPO or North Portland. Whereas Lake Oswego has bird calls that tell you it’s time to cross the street, St. Johns has its resident schizophrenic who will run you over with his grocery cart if you don’t move fast enough when deciding which way to go at an intersection.
So you might imagine that I was a little nervous meeting The Ronni Bennett, especially when she suggested High Tea for lunch. People who know me well understand that I’m more a Chicken McNuggets kind of girl than one who sips any kind of tea, much less one made of High.
And then there was the beer wagon. I was able to transport myself from St Johns to Lake Oswego by virtue of the fact that my daughter and her family were on vacation that week, traveling in her mother-mobile and leaving her husband’s car for me to use. Since Trevor works as a rep for a beer distributor, his car carries lots of samples, all rolling around in the back.
But my nervousness disappeared as soon as I heard Ronni laugh.  It was a gritty streets of New York City kind of laugh, a "you ain't showing me anything I haven't seen or smelled before" kind of laugh.  I immediately fell in love.
We did go to High Tea at a place called Lady Di's Tea Shoppe, a sobriquet Ronni made fun of right after she complained about Lake Oswego being just "too damned clean."  We began talking over our little sandwiches and kept on for five straight hours. We talked about the world and politics and aging and death and cats.  Ronni's life could be the basis for at least several pages in a Who's Who of Culture and Counterculture of the Second Half of the 20th Century, and she remembers it all.  I was absolutely enthralled and edified.
And to top it all off, she gave me a pastry blender!  Not because she thought it would save me from Chicken McNuggets, but  because she had promised me her extra one should I ever come to see her.  I'm assuming she already suspected I wasn't much of a cook as she also gave me a packaged Apple Crisp mix.  All I have to do is "add fresh apples and butter." 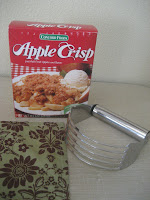 My new pastry blender (and Apple Crisp mix)
I wonder if I will need to cut up the apples.  I'll ask Ronni the next time I see her.
at July 26, 2011

Oh how fun Marcia. I would love to meet people I've so admired on the blogging circuit.....you are definitely high on my list.

Me too you. Dani, I'm loading up the car to drive to Oklahoma right now. I'll honk when I get there.

hmmm...OK by way of NM...?
Cute, Marcia; I'll bet Ronni is a wonderful conversationalist. Cool you got to spend some time with her.

Yep Kate, surely New Mexico is on the way to Oklahoma.

The UK is really not that far from the States, you know.

I'd love to meet my favourite bloggers. The problem is that they'd probably be better off not meeting me. In a blog you can hide a multitude of sins, whereas face to face you have to come clean. I'd hate for you to find out what a fraud I am.

Ronni doesn't look anything like I imagined her. That's the other thing about blogging: you form an image which is based totally on a person's writing, not their physical appearance and when you meet, a major readjustment has to take place.

Friko, after I leave Oklahoma, I'm going to drive to England to see you.

Oh, wow! Sounds like a terrific rendezvous. Sounds like the two of you were cut from the same cloth, in essence.

Thanks for letting us crash your visit with Ronni just a bit! I have to think you two share lots of characteristics--feisty, never give up, sly humor and not afraid to say, loudly, that the emperor's wardrobe is a bit lacking.

That is so great--I commented to Ronni that I was jealous that she got to meet YOU!

Lucky you and me.

I met Ronni a few years ago when she lived in Maine. She came down to the Boston area and we met for lunch at "Joe's Bar and Grill."

I arranged for a ride with senior transportation and when the person who was booking the ride for me wanted to know if I needed to arrange a return ride I said "NO."

She burst out laughing - in the first place that was an unusual request from a senior - to go to a bar and secondly "no return ride."

It so happens my son was going to give me a ride home.

It turned out that meeting Ronni that day for lunch was memorable on two counts!!!

It was a great afternoon, Marcia. how can it be that we live so far away. It's the blessing and curse of blog friends.

You were a delight and I'm so glad we made the time.

I hate to tell you this, but yes - you are required to cut up the apples. Actually, you have to peel them too.

Well damn, Ronni. Can I cut them up with the pastry blender? I'm not sure I can find a knife.

Here's me thinking you got one of those fancy pasta things and then you post a photo of the crappy thing I have. Cleaning these can be a challenge. Did she give you a brush. Your fingers get cut if you jam them between the blades. Great post as usual, and I missed you. Dianne

PS. The back of my daughter's vehicle is filled with empty Mountain Dew cans. You are so classy with those beer cans.

Dianne, I don't plan to clean it.

How wonderful when blogging friends can meet up, and as Ronnie says - how great that we recognise one another as similar voices/friends right from the beginning.

That looks like the pastry blender my Mom had and told me I'd need. I wouldn't know how to make good pie crust dough without it, though I don't bake pies any more.

Reads like you had a laughing good time with lots of jaw wagging that you and RB enjoyed. Great!

I remember my mother-in-law insisted I have a pastry blender. When I asked her why she said, "so you can make pie crusts, dear." I thought it was hilarious and I did make one pie crust....it convinced me to buy them pre-made. Love your stories!

Two people I am dying to meet, meet without me. Drats.
Oh I am all agog to see what happens to that pastry blender, work of modern wall art, I would think....LOL.
XO
WWW

WWW, that's a great idea: take the Ronni Bennett Pastry Blender and make it into Wall Art. Let me think on that.

What a great adventuress you are! I love when you meet up with your blogging sisters. I didn't know about Ronni. Where is her blog? I can hear the beer bottles rolling around and clinking.
I love high teas - it's the scones and clotted creme I crave. I remember the schizophrenic from last year's trip to Portland. What is a pastry blender????
While you are in Oklahoma, I will be in Atlanta next weekend, stopping by on the way home to Fla. Another misalighned (sp?) star system.

Wow! How did I miss this post? Doing some entertaining myself, I guess! SO funny how you describe all things awkward, Marcia. I've met quite a few on-line friends over the last decade. It is always an event to realize that there is much good will inherent in people but there is nothing like that first encounter and confirmation of your intuition. Thanks once again for keeping things real and bringing a smile to my face.

Sounds like a wonderful time was had and, I suspect, by both. Enjoy that pastry blender!

I'm driving home from vacation - SC to NY. As I sit here in a motel in PA I have time to do some catch up. Of course I went to your blog to see what you had been doing. Oh my, you and Ronni visiting. I can just see the two of you talking, laughing, teasing, serious and silly. Two of my favorite people spending an afternoon together - how wonderful.

I just found your blog and I think it's great. I'm also interested in aging and I like telling stories that focus on art, humor and nostalgia. I look forward to coming back here for more of your unique outlook on life..