This One's for You Again, Billy 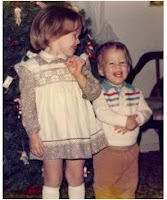 I couldn’t possibly be pregnant. I already had a perfectly good baby.
We were living in your grandfather’s house, sleeping in the guest room that shared a wall with Doc’s giant Magnavox TV, which he kept ratcheted up to about 1000 decibels because he was deaf. On the other side of the other wall was Melissa’s crib, and outside our window was Henry, howling out his confusion and exasperation at being banned from the house. There was many a night I could be seen climbing out the window to throw something at the dog to hush him up without having to walk my nightgown-clad body past your grandfather in the den watching Johnny Carson. Through it all, your father just continued to saw logs. To this day, I can’t for the life of me figure out how I could have possibly gotten pregnant, but pregnant I got.
Born on the thirteenth of March, exactly two years and ten days after Melissa, you were a sweet baby, cute though rather odd looking with your cone shaped head from being so big and perhaps stuck in the birth canal for a bit too long. You were also an easy baby. After just one night of sleeping in Melissa’s room (“Mama, the baby’s crying!”), we moved you into the living room of our tiny house, where you stayed until we finally enclosed the carport to accommodate Daddy’s office.
By the time we moved into the big house, you and Melissa were pretty much inseparable, going to Children’s Friend each weekday, playing outside in the afternoon and watching C.H.I.P.S. and Night Rider in the evening. I was your kindergarten teacher and it was during that time you buddied up with Chris (like a lawn) Moore and a couple more little scalawags with whom you remained friends throughout high school. I loved being your teacher and your mama at the same time. I thought you were just about the cleverest kindergartener ever to build a block tower and then knock it over.
I still remember the drawings you did as a little boy, airplanes with prodigious amounts of cloud-like smoke spewing from their innards, and little round cars, often with one flat tire, which I think had typically been shot out. I now look back and wonder if those gimpy automobiles offered a glimpse into your personality and view of life, as if you expected good things seldom to be perfect. That probably came from having Melissa as your big sister. Remember the time when you watched that scary movie and she materialized and startled you at the top of the stairs? You were so horrified that you refused to go upstairs by yourself for the longest time. Putting my picture in that locket and that locket around your grimy little neck was most likely my finest moment as a parent. No boogie people could have survived a gander at that face and you knew it.
Your earliest birthday parties were in tandem with Melissa’s, mainly because I was cheap and tired. I particularly remember those at Dry Lake Park and Burger King. However, your most memorable party, not counting those as a teenager I don’t even want to think about, had to have been the spend-the-night one when the partiers tried to turn over Dianne’s mini van just after dark and then flew the balsa wood airplanes in the front yard at four in the morning. Was that the same one where Molly sat naked on the dining table during the birthday-candle-blowing-out?
On the Molly topic, it was when Molly came along that your life changed and I began to catch a glimpse of the man (and father) you would become. After getting over your disappointment about not having a little brother, you and she developed a bond that remains to this day. Just as Melissa helped form you, you did the same for Molly. 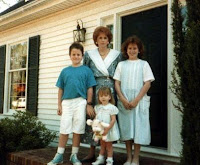 Notice your hand here. You
are making sure Molly doesn't
fall off the porch.
Despite that good old Warner Robins tradition, you were never much interested in sports. You played Little League and were pretty good; however, soccer drove you nuts as those other little boys just ran all over everywhere and didn’t stay in their assigned positions. The idea of random shenanigans seldom got in the way of your logical thinking and that hasn’t changed.
In middle school, when you halfheartedly joined the football team, I remember going to a game and complaining to your coach that he wasn’t letting you play. He told me every time you got to the front of the line and it looked like you might actually have to go onto the field, you’d disappear to the back. Again, to your way of thinking, being on the team was enough, especially since you got to wear that great green uniform. Actually playing, on the other hand, could have lead to injury.
Speaking of uniforms and perhaps a different type of machismo, you didn't fare particularly well in the one ROTC class you took in high school either, the one you failed, partially because, on the one day you deigned to wear that uniform, you sported a t-shirt which offered the notion that one should Play Naked Lacrosse in bold letters under it.
To this day, you are one of the few heterosexual men I know who isn’t interested in sports, and, in fact, you appear to consider this to be a badge of honor. When you moved to Portland, you did join a kickball team, which you continue to enjoy, at least the beer drinking part of it. It did turn out, however, that playing in a co-ed league was mostly just a ruse for meeting women, and we have kickball (at least in part) to thank for Mary and Cami.
I recall once, when you were around fourteen, you told me that I needed to make you tougher. We were standing in the kitchen; I remember it well. I felt so sad, so insufficient, so unable to do what you'd asked of me. I couldn’t play golf or throw a ball or even pee standing up. But, you know, like most things, it turned out just the way it should. Even though neither of us had what it took to make you into the Incredible Hulk, you turned out to be tough in all the ways that are important. You are steadfast and kind and loving and funny, ready to make a joke when you sister is being wheeled into surgery, determined to be at her bedside when she returns. You are a partner to Mary and a wonderful father to Cami. You are your own person, content to be the basement guy, happy with your wires and connections, caretaker of drunks and fools. You were definitely born into the right family.
Finally, since I do usually think of you in one of those t-shirts you still wear (and wear and wear), my final word on the Billy-factor will have to be that you are like one of your shirts: typically unconventional, occasionally tacky, and often spouting something outlandish. But, oh, what a comfort you are. 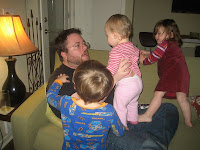 A wonderful tribute...wry and funny and loving.

What a comfort and how greatly loved and admired.

Another glimpse into the world of Marcia, a world of warmth, laughter, understanding, tolerance, acceptance and love.

Could I come and join you, please?

Oh you have such a gift for these tributes, Marcia, so clear and clean and emotional without being mawkish in the least.
How splendid that you and Billy found each other!
XO
WWW

I am just imagining how many tiny moments of smiles and tears arose inside when you were working on this post.
Happy Birthday Billy & Happy Birthing Day Marcia.

The locket you put on Billy's neck is so touching. Touching & brilliant. I'll bet that moment is frozen in time for you. Safety & love for a small, frightened child is a parent's finest moment(s). The locket is that bond - a promise - a reassurance - that you are always there, even now on his 30 something birthday.
Soccer is our baseball and football in Israel. You discription of rules in the midst of chaos is so funny and so apt. Having grown up with the Bklyn Dodgers I completely understand Billy's feeling about soccer.
Such a lovely journey back through time for you.
I hitched a ride to those days of my little family's as well.

No one knows their child like a mother and [lucky Billy] his Mom knows how to tell a story with levity, compassion and warmth. Happy Billy-Birth to you both!

A beautiful loving tribute that shows a strong bond between you and Billy. I love the t-shirt comparison. Mary B

You sure do love your children a lot!

Most days I do.

What an amazing picture you paint with words. I could easily see him grow in size and then as a man. Happy Birthday Billy.

PS. your first sentence shocked me as I was thinking it was a current observation. Phew.

If I were Billy, I would be so proud of this post, a wonderful birthday gift, wonderfully wrought. And isn't it wonderful that your son is one of the good guys!

We are so blessed to have our children. Love, love, love them!
Happy Birthday to you both.

The photograph of you with the two young ones makes me laugh. You look about as old as Sissy Spacek when she got pregnant as the "Coal Miner's Daughter." What is it about you red heads? We have them in our family and they seem not to age.

Re Billy. My kids would kill me if I wrote a post like this. Oooohhh Mooommmm!! Dianne

Reads like a story that would give your son much fun and joy reading.