Looking for the Awesome


The other day, my daughter, Melissa, and I were heading to the local outlet mall with her two kids, who also happen to be my grandkids. Miles and Georgia were in the backseat, legally secured in their newfangled, regulation, impossible-for-Grammy-to-buckle-without-cursing, car seats. Georgia was asleep, holding best stuffed bud, Beary Manilow, in a death grip, and Miles was complaining because it was taking too long to arrive at the restaurant where he was going to get the juice we had promised him.  This delay was based on the scenic route we'd embarked upon, out of Portland, through Troutdale, where Melissa and Trevor had celebrated their wedding, then down by the Sandy River, and up the side of a small mountain.


“Juice! I want juice!” Miles reiterated the iteration he’d iterated quite a few times during our journey. Truth be told, he would have been much happier at home riding his Christmas bike, but, at three, he doesn’t really have much of a say about how he spends his days, other than belting out “Juice!” every few minutes.

In an effort to hold our squirmer off for while longer, either Melissa or I had promised, at some point, that we were going to see something really awesome at the top of the mountain, yes indeed, employing the overused term that’s become such a cliché. What that awesome thing was we had no idea, but what we wanted was for him to stop fussing long enough for us all to be able to take in the beauty of that mountain and that river and the time we were spending together, just the four of us snugly snapped into our warm seats in Melissa’s mom-mobile on a wet and cold Oregon December day.

A bit more time went by and we discerned that the complaint department had apparently closed down in the back and we thought Miles, thumb in mouth and Gankie tucked under arm, had dozed off to snore in unison with Georgia by his side.  With new confidence, we drove a little higher up the mountain, enjoying the quiet and the companionship, mother and daughter all grown up.

However, just as we were lulled into a faux serenity and some entry-level contemplation, a little voice emerged from the back seat.

“But where’s the awesome?”

After a chuckle at Miles’ cuteness with his childish but point-on question, I stopped to consider the fact that we often spend so much time overusing a term based on a dearth of a more varied and thoughtful vocabulary and  attempting to make the mundane noteworthy, that we overlook the minor miracles, the real awesomeness we happen upon, but often fail to note, in the hurry up of our everyday lives.

So, with that in mind, I challenged myself to notice and document the truly awesome for the rest of that day.  And I did. 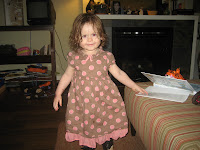 Cami after our walk in the rain
I know there was more to that day that I could have commemorated, but I'm still new at looking for the awesome.  I'm hoping this Omar Khayyam treasure, recently shared by a friend, might help me to stop and ponder the wonderful.

Be happy for this moment. This moment is your life.

Love your descriptive story. It reminds me of two things. 1) Isn't being Grandma wonderful? (For all of the above reasons). 2) As we age, I think we appreciate beauty(in all forms)more than ever. Sounds like you're having a great time. Happy New Year!

Oh Marcia:
I think you're going to enjoy this link my dear:
http://1000awesomethings.com/
And I'll say no more except those grandkids are gorgeous!
XO
WWW

WWW, you are so right. I've already put the link on Facebook. Fantastic!

My name is Patti and I am an "awesome" abuser. Was pleased to read what really is awesome.
May add finding another word to replace that one in my to do list for 2011. Thanks.

Marcia, Really awesome is sleeping children. The nice thing about being a grandparent is that you can give them back at the end of the day...maybe.

Good idea to look around you like William Bleake and see "infinity in a grain of sand" for the awesome things in life.

Obviously Grammy is the Awesomeness...and wise in her Omar Khayyamness!

BTW...Those are the sweetest Grandchildren EVER!

Thanks for the reminder to be grateful and thankful for the best bits of life. A Guid New Year to you and those you love.

I'm back. Boy am I glad, that I'm back. Such treasures like this post are what makes very day 'awesome'.
Awesome is, switching my computer back on and finding friends assembled, waiting for me to join in.

Oh Marcia, I'm going to try to remember this forever. "Be happy for this moment. It is your life." and yes....it is awesome. Thanks for the reminder!

This is a lovely post. I saw my two little grandsons during Christmas so I understand the pleasure you had visiting yours. It is good to live for the moment and enjoy it, so many of us are always living in the future. I hope 2011 will bring you all your wishes.

It's so hard in this world to tune everything out and listen for those small voices that are telling us what life is really all about. I'm glad you have found a way to remember and record so that all may enjoy.