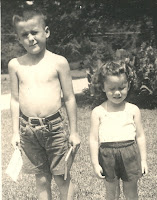 When I was a kid, I was a real crybaby. The only spankings I  remember were when my mother had had enough and she would pop me on the bottom to “give me something to cry about.” She later told me she believed that I would get into a state where I needed to cry hard and then get over it. I don’t know if that was true or if she was so sick of my whining that she just snapped.
I remember when I was about six or seven, a time when I was quite proud because I hadn’t cried for an entire day. That was most likely something my entire family noted and celebrated.
These days, I rarely cry. I can go months without a whimper or a sniffle, probably because I pretty much lamented myself out when I was a little girl.
My brother, Sandy, was sometimes mean to me and he ignored me for most of my childhood. Maybe he couldn't take all the blubbering.   Right now, he's in ICU at Georgetown University Hospital and I can’t stop crying.
You see, despite his slow start, he turned out to be a really good man, maybe the best I’ve ever known, one I still need to have on this earth with me for a while longer.
So Sandy, if you'll just get better and out of that place, I promise to stifle it.
at November 20, 2010

Of course, he's ignoring you. You're just a little snivelling brat and he's a big boy!

I do so hope your big brother will get better and you and he can rehash the past. My very best wishes to both of you.

I will be thinking about you and the love you have for that big brother until he is back in the mix to pick on you. God speed his recovery.
Cile

I'm sending positive thoughts your way...and to Sandy as well. I hope he's out of ICU soon and on the mend. What a difficult time for you, Marcia.

Thanks Friends. I'll keep you posted. I'm looking forward to his being embarrassed I blogged about his illness.

Odd isn't it that the siblings we could barely tolerate, become our best friends when we mature.
Hope he is home soon and feeling up to ignoring you again.
Only good thoughts for you both.

My goodness you were a cutie pie. How could your brother ignore such charm.

Brothers, we can't live with them or without them it seems. They are males remember. I hope your brother soon heals and you have more time with him. Take care.

Oh shite, so sorry to hear this Marcia. I don't know what I'd do if it were one of my bros. Bawl like a baby.
A speedy recovery to him. May he come back and mightily chastise you for posting this....
In my thoughts.
XO
((((Marcia)))
WWW

Thanks again. I needed some sympathy and sympathy is what I got. This internet thing is pretty powerful.

Oh Marcia, I am so sorry. You wrote such a touching piece. I hope Big Brother will soon be home and will read you the riot act for posting this about him. Then you two can hug and remember how much you really mean to each other. I'm sending positive, healing and loving thoughts to you. Mary B

Marcia,
I am so sorry to hear about your brother. Our prayers are that he will be better ral soon!!
Love,
Barbara

My thoughts are with you and positive energy to your brother.

Me, too, Marcia. Warm beautiful healing thoughts from everywhere it seems. Just rest in the glow.
May all be well with Sandy and with you so quickly you'll scarcely remember this scary time.
xoxoxoxo

So sorry to hear about your brother, and I hope you get better news of him soon. The photo is priceless, thank goodness you turned out to be close when you both grew up. Every Blessing

Thanks again to all of you. I talked to Sandy's daughter this morning and he is better today.

Oh Marcia! I am happy hear he is doing better today. I understand being ignored by an older sibling...only mine put on a good front and now I don't have photos to prove it. Will check with you in the morning on his progress.

Marcia, Hope your big bro is doing better and soon back to ignoring you. Brothers are special people. Hugs to you.

I have been in ICU at Georgetown and if anyone can take care of your brother it's there -- blessings to him -- I am so sorry to hear this -- I am getting tired of all the people who have been in hospitals lately -- this year has just sucked throughout...

I used to be a real drama queen growing up. Not much of a cry baby though...