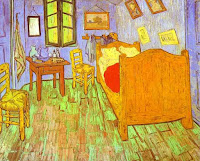 Seeing my yellow chair in my purple room made me think of this Van Gogh painting. Never mind that it was painted during one of his stays at an insane asylum.

My best friend, Allison, gave me a yellow chair for my 60th birthday. She found the chair in a thrift shop and painted it herself.

Allison has many gifts and interests, but crafting isn’t necessarily one of them. She’s really smart and funny. A great cook and a lover of games, she has exquisite taste when decorating her home, and she’s definitely the hostess with the mostest. However, unlike me, she doesn’t usually harbor the need to paint or glue or carve or stitch.

A couple of years ago, Allison talked me into taking a knitting class. I think she was excited about the opportunity to expand her social network as, many weeks, our Friday night early bird dinners are the only activities penciled in on our after-work and week-end agendas, or at least that’s true for me. Since I’m not much of a joiner, she had to twist my arm.

It took just one lesson for the both of us (and probably everyone else in the class) to realize knitting wasn’t for Allison. I wasn’t great at it, but she was just pitiful, or, as our friend Linda said, Allison was a “shitty knitter”. She left a quagmire of knotted (not knitted) yarn all the way from the knit shop in the Virginia Highlands area of Atlanta to her home in Decatur and back again, since she did have the courage, or perhaps the insanity, to complete the course. And to top it all off, our class was made up of Georgia Tech undergraduates and twenty-something prissy girls wanting to learn to knit tea cozies, not the interesting elderfolk we were expecting. Once again, we were the oldest people in any given group, even in a group of knitters, for God’s sake. So much for your grandma’s knitting klatch.

So the yellow chair was a wonderful surprise, not only because I love how it looks next to my white dressing table in my purple bedroom, but also because my non-crafting oldest living friend forgot her mortifying yarn imbroglio to dip into (probably literally) a pint of bright yellow paint to create a one-of-a-kind gift that fits incongruously next to a white dressing table in a purple room belonging to a friend who doesn’t have exquisite taste when decorating her home. 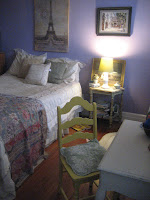 My very own asylum
My pictures are hanging just as crookedly as Vincent's.
Allison and I go way back. We met when her family returned to Savannah in the mid 1960’s, and we immediately bonded by learning that we came from two of the very few liberal families in our entire neighborhood, perhaps in all of Chatham County. Later, we were room-mates at the University of Georgia and remained close through marriages, births, divorces, good and bad times. Allison became a Methodist Minister and later a clinical therapist while I climbed up and slid down the ladder of success in the field of Education. Allison preached at the funeral of each of my parents, and when, at the edge of a gorgeous northern Arizona creek, she was helping me open the box that held my mother’s ashes, the wind picked up and part of Mama became one with Allison, yet another example of God’s surprisingly irreverent sense of humor.

In some kind of cosmic coincidence, Allison and I moved to Atlanta at about the same time five years ago. She’d been living in Savannah and I was in Middle Georgia and we’d see each other several times a year at most. But when I took a job with the Georgia Department of Education about the same time she decided to move her practice to Atlanta in order to be closer to her grown daughters, we picked up pretty much where we’d left off in college. I bought a condo in Midtown and she purchased a small house with a big yard in Decatur and our Friday afternoon early bird dinner and weekly debriefing tradition began.

One of the benefits of being on up there in years is having the long view. We watch our childhood friends grow up and then grow old, and see that they are the same human beings, the same little children they always were, inside what are now somewhat wrinkled and irascible exteriors. One old friend still has the gamboling lope he employed as a little boy, another is the same verbally-dexterous smart ass she was when we met at eighteen. Allison remains good and generous and quirky and ready to take on a world that doesn’t always share her sometimes complicated views. I, of course, am still the same sweet girl I always was, the perennial optimist who continues to think my latest creative venture will garner me fame and fortune, and I’m not really all that wrinkled either.

On the Friday after my birthday, Allison and I each splurged to celebrate at a restaurant more upscale than most of our usual Friday haunts. As we were finishing our meal, we started reminiscing about our childhoods and about how long we had been friends, at which point I exclaimed loudly enough for even the dishwashers to hear, “I can’t believe we’ve been married for forty-seven years!” We, of course, snickered and yes, snorted, at my gaffe, but later, as I was driving home with my re-purposed yellow chair in the backseat if my car, it hit me that our relationship had pretty much been a lifelong association, a partnership that had lasted longer than either of our spousal affiliations. I'd had forty-seven years of knowing Allison would be there if I needed her, pretty much taking for granted that she would hear me out, stand by me, have my back, and care about my future.

In thinking about my friendship with Allison, I realized that it sounds better than many marriages I know. However, for me personally, I don't think it was until I reached the age when my kids were grown, when I stopped looking for some poor man to keep me from feeling invisible, that I even began to know what it means to have a good female friend.
And so, with my yellow chair casting rays of sunshine onto my otherwise purple life, I'm optimistic that Allison and I will remain good friends into our twilight years, even if life and grandchildren coax us to different places. No matter what happens, I'm pretty sure we will continue to check up on each other and wonder in tandem how we got this old so quickly and what on earth happened to all those years.
at March 30, 2010

Yes, I too have learned, over my many years, that my female friends are very special people. They form the framework and structure of my life. An added plus are the ones that have a history. I still see my 1st grade best friend every year. You and Allison are very lucky to be a part of each others life.
Thanks for telling it so very well.

Never ever read a more touching account of what friendship is all about. Surprisingly, it brought tears to my eyes. --Holland

Melissa (with Miles in lap) said...

A real gift of friendship and love. Thanks for sharing it.